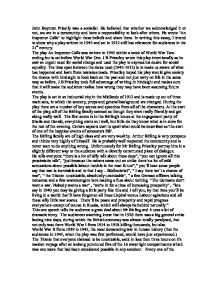 John Boynton Priestly was a socialist. He believed that whether we acknowledged it or not, we are in a community and have a responsibility to look after others. He wrote "An Inspector Calls" to highlight these beliefs and share them. In writing this essay, I intend to show why a play written in 1945 and set in 1912 still has relevance for audiences in the 21st century. The play An Inspector Calls was written in 1945 within a week of World War Two ending but is set before World War One. J B Priestley wrote this play intentionally as he saw an urgent need for social change and used the play to express his desire for social equality. The time span between the dates used (1945-1912) is to make us aware of what has happened and learn from mistakes made. Priestley hoped his play would give society the chance with hindsight to look back on the past and not just carry on life in the same way as before. J B Priestley took full advantage of writing in hindsight and makes sure that it will make the audience realise how wrong they may have been assuming future events. The play is set in an industrial city in the Midlands of 1912 and is made up out of three main acts, in which the scenery, props and general background are changed. ...read more.

This is similar to a comparison made between the drunken, playful Eric of Act 1 with the sober serious Eric at the end of Act 3 who has learned that his own mother played a major role in driving the woman bearing his child to suicide. The results of the Inspectors visit as regards the younger generation are total metamorphoses of character. The older generation however don't see that they have done anything wrong. Mr and Mrs Birling are all too happy to dismiss the evening's events as false once the chance appears that the Inspector may not have been a police Inspector. Their characters stay the same virtually from beginning to end, with only the short amount of time between Eric's part in the saga becoming known and the Inspector showing any waver in their determination that they were right. The senior Birlings are the examples of the people who will be taught through "Fire and blood and anguish". This is very different to the younger generation. "You seem to have made a great impression on this child Inspector" comments Birling, and is answered with the statement "We often do on the young ones. They're more impressionable." This implies that Priestley is trying to say that there is potential for change in the "young ones" which is not as evident in the older generation. ...read more.

The other parties have views similar to Priestley, so Priestley was trying to get his message of community and socialism across to the audience through the actions of the characters. The ending, as I have already pointed out, symbolises the fact that if you do not learn your lesson the first time, you will be taught it again and again. It symbolises that you can't run from your conscience, as the Birlings will find out. Priestley uses the dramatic twist of the phone call at the end of the play to emphasis this point, and makes it more effective by placing it just as the characters are beginning to relax. It serves to 'prick' the consciences of both the characters and the audience. Priestly wanted everyone to believe that they were all responsible for each other and that everyone should have equal chances and equal rights in their lives. Overall, I would say that Priestly has achieved what he wanted to achieve. I found the play quite entertaining and interesting to read. It deals with a number of key issues compared to the time it was written in, as well as gripping the reader as the story twists and turns. Surprises are frequent and also well written. I was truly stunned by the turn the play takes in the end. By reading the play I can now understand how a perfect world can soon be broken down. ...read more.