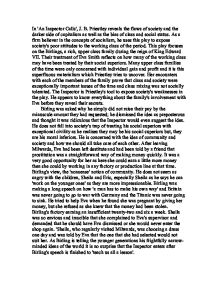 In 'An Inspector Calls', J. B. Priestley reveals the flaws of society and the darker side of capitalism as well as the bias of class and social status. As a firm believer in the concepts of socialism, he uses this play to expose society's poor attitudes to the working class of the period. This play focuses on the Birlings, a rich, upper class family during the reign of King Edward VII. Their treatment of Eva Smith reflects on how many of the working class may have been treated by their social superiors. Many upper class families of the time were only concerned with individual gain and profit and it is this superfluous materialism which Priestley tries to uncover. Her encounters with each of the members of the family prove that class and society were exceptionally important issues of the time and class mixing was not socially tolerated. The Inspector is Priestley's tool to expose society's weaknesses in the play. He appears to know everything about the family's involvement with Eva before they reveal their secrets. ...read more.

'Sheila, who regularly visited Milwards, was choosing a dress one day and was told by Eva that the one that she had selected would not suit her. As Birling is telling the younger generations his frightfully narrow-minded ideas of the world it is no surprise that the Inspector enters after Birling's speech is finished to 'teach us all a lesson'. An Inspector Calls, set in 1912, is a play with many social and political messages. J. B. Priestley believed a great deal in socialism and believed that many other people needed to be more caring about their community and the people in it. Priestley uses the character of the Inspector to convey his own thoughts, feelings and opinions about social issues. However, he also uses other characters, particularly Mr. Birling, to show the audience how cynical some people can be. It is possible that J.B.Priestley set this play in 1912 for a reason. Arthur Birling is a rich businessman who thinks very highly of himself, even though he is often wrong. ...read more.

After Gerald cast Eva aside, she was able to support herself reasonably well for a while on the small amount she had saved while under the care of Gerald. She had not had a job in a while and it seemed that she had no intention of attempting to find work. When she met Eric at the Palace Bar she gave the impression that she had come close to giving up on life. When Eric met Eva he was drunk, as usual, and she later admitted that she had been to 'chiefly because she'd not had much to eat that day'. Eric found her 'pretty and a good sport'. He walked her back to her lodgings and asked to come in but she refused. He claimed he was in the state when 'a chap easily turns nasty' and he threatened to cause a scene, so she let him in. He then took advantage of her. About a fortnight afterwards he met with her again and this time they talked a bit but he claims that he 'wasn't in love with her or anything'. ...read more.