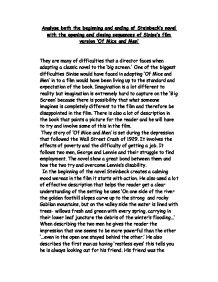 Analyse both the beginning and ending of Steinbeck's novel with the opening and closing sequences of Sinise's film version 'Of Mice and Men'.

Analyse both the beginning and ending of Steinbeck's novel with the opening and closing sequences of Sinise's film version 'Of Mice and Men' They are many of difficulties that a director faces when adapting a classic novel to the 'big screen.' One of the biggest difficulties Sinise would have faced in adapting 'Of Mice and Men' in to a film would have been living up to the standard and expectation of the book. Imagination is a lot different to reality but imagination is extremely hard to capture on the 'Big Screen' because there is possibility that what someone imagines is completely different to the film and therefore be disappointed in the film. There is also a lot of description in the book that paints a picture for the reader and he will have to try and involve some of this in the film. They story of 'Of Mice and Men' is set during the depression that followed the Wall Street Crash of 1929. It involves the effects of poverty and the difficulty of getting a job. It follows two men, George and Lennie and their struggle to find employment. The novel show a great bond between them and how the two try and overcome Lennie's disability. ...read more.

The music starts slow then gradually gets faster and tells you something is happening (chasing) it is also serious. Not a lot of dialogue is used at the beginning. You hear a woman screaming sounding frightened. You also hear a man shouting "Come on!" "Lennie" This tells us that they need to get away from what is happening and also gives one name of a character. There is a lot of SFX are used effectively during the beginning, dogs barking, a train, the music ends abruptly and you can hear the woman out of breath. You can also hear men running and splashes of water. The book lacks action and starts more calmly than the film. The book doesn't tell you why the men are running away and doesn't mention the woman, train or dogs at all during the beginning. The introduction to the two characters (George and Lennie) is very different. In the book it starts with a great deal of description. The film shows you they are in some kind of danger whereas in the book it introduces them calm and with a lot of description about setting and location. The death of Lennie shows alot more emotion in the novel, compared to that of the video. ...read more.

In the film it doesn't show the audience his struggle to build up the courage to shoot him. It then cuts back to a CU George on the train again, like in the beginning. This time we again go in to his thoughts as he remembers the good times with Lennie. It then shows George and Lennie side by side, Laughing and smiling. Lennie puts his arm around George like a child wanting affection from his mother. This caption is in slow motion to show the audience how close they were and it also gets the audience emotionally involved again and makes them feel sorry. The music used in this part of the film is sad and slow, again for emotion. In my conclusion I have found that there can be a lot of differences between the book and the film. In my opinion I didn't prefer either one because I liked both of them but for different reasons. I liked the book because I liked the idea that Steinbeck emotionally involved the reader with the death of Lennie. It was in my opinion more emotional than the film even though it is upsetting because the music sad and the flash back at the end makes you feel sorry for Lennie and also George. ...read more.