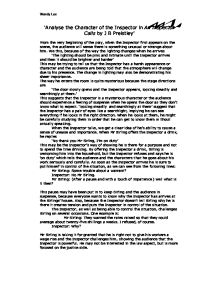 'Analyse the Character of the Inspector in An Inspector Calls by J B Preistley'.

'Analyse the Character of the Inspector in An Inspector Calls by J B Preistley' From the very beginning of the play, when the Inspector first appears on the scene, the audience will sense there is something unusual or strange about him. We this, because of the way the lighting changes when he arrives 'The lighting should be pink and intimate until the Inspector arrives and then it should be brighter and harder' This may be trying to tell us that the Inspector has a harsh appearance or character and the audience are being told that the atmosphere will change due to his presence. The change in lighting may also be demonstrating his sheer importance. The way he enters the room is quite mysterious because the stage directions are 'The door slowly opens and the Inspector appears, looking steadily and searchingly at them.' This suggests that the Inspector is a mysterious character or the audience should experience a feeling of suspense when he opens the door as they don't know what to expect. 'looking steadily and searchingly at them' suggest that the Inspector has a pair of eyes like a searchlight, implying he can see everything if he looks in the right direction. When he looks at them, he might be carefully studying them in order that he can get to know them without actually speaking. When the Inspector talks, we get a clear idea of he's ability to cause a sense of unease and importance. When Mr Birling offers the Inspector a drink, he replies 'No thank you Mr Birling, I'm on duty' This may be the Inspector's way of showing he is there for a purpose and not to spend the time drinking. By offering the Inspector a drink, Birling is welcoming him into the household, but the Inspector refuses and says he is 'on duty' which tells the audience and the characters that he goes about his work seriously and carefully. ...read more.

The Inspector, as well as being able to control situations and twist meanings of words, can also turn people against one another. When he is interrogating Sheila, he mentions that Eva's name was changed to Daisy Renton, and Gerald immediately says: 'Do you mind if I give myself a drink Sheila?' Shortly after that, the Inspector leaves the room, giving Sheila and Gerald time to argue about how Gerald knows about Daisy Renton and how he gave himself away: Sheila: Well, Gerald? Gerald: (trying to smile) well what, Sheila? Sheila: How did you come to know this girl - Eva Smith? Gerald: I didn't. Sheila: Daisy Renton then - it's the same thing. Gerald: Why should I have known her? Sheila: Oh don't be stupid. We haven't much time. You gave yourself away as soon as he mentioned her name. Sheila is referring to her own fianc� as 'stupid' which means she is clearly infuriated by what she has learnt so far and is demanding to know the truth. Gerald confesses to the Inspector, with much reluctance, about what happened. He says 'I didn't like the idea of her going back to the Palace bar. I didn't ask for anything in return.' To which Sheila replies: 'Why are you saying that to him? You ought to be saying it to me.' Then Gerald says to Sheila: 'I suppose I ought to really. I'm sorry Sheila. Somehow I- Sheila then says: (cutting in as he hesitates) 'I know. Somehow he makes you.' This shows us that Sheila is aware of the ways in which the Inspector persuades them to tell them the truth. One may expect that Gerald is about to explain why he had this love affair, but instead, Sheila says 'Somehow he makes you.' Which shows the audience how stunned or bewildered she is to see him be able to do this. Sheila always says what she feels which may make the audience feel she is the most honest member of the family. ...read more.

Died in agony-' Eric replies 'alright, don't pile it on.' This means that he is still feels very guilty for what happened and doesn't want the details to be told again in such a merciless way. Sheila and Eric are the most conscientious members of the group, whereas Mr and Mrs Birling, together with Gerald believe that the whole thing is a joke. Because the stage is meant to be packed with heavy furniture, showing off the wealth and success of Birling's work, there is a rich feel, but not a homely touch. This may strike the audience as one of the reasons why the Inspector is so merciless in his interrogations, because he doesn't feel at home. The final speech has so many messages and techniques that the audience cannot fail to notice his peculiar way of getting the message across to people. 'But just remember this...' is a way of addressing everyone, including the family and audience and is a sharp way of beginning a speech. When one uses this way of speaking, it seems quite personal, even thought it is aimed at everyone. When the Inspector says 'one Eva Smith has gone' he is emphasising her death and perhaps making them feel even guiltier. He uses short and direct sentences to emphasise his message - 'We don't live alone.' This may also mean that the Inspector is watching them at all times. This may also carry the message that there is no such thing as social class, and that everyone just lives together as members of one family. Some say the Inspector's speech seems as if the final speech has been rehearsed. Others believe that because he has learnt so much about the family he knows what to say that will make an impression on them. The Inspector can be seen as an embodiment of the nation's conscience and Preistley may have developed this character in such a way to get across to the audience how conscience can come back to haunt you when least expected. Wendy Lee ...read more.