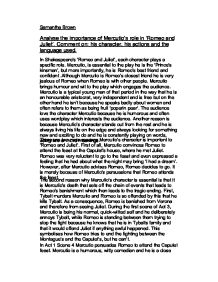 Analyse the importance of Mercutio's role in 'Romeo and Juliet'. Comment on: his character, his actions and the language used.

Samantha Brown Analyse the importance of Mercutio's role in 'Romeo and Juliet'. Comment on: his character, his actions and the language used. In Shakespeare's 'Romeo and Juliet', each character plays a specific role. Mercutio, is essential to the play he is the 'Prince's kinsman', but more importantly, he is Romeo's best friend and confidant .Although Mercutio is Romeo's closest friend he is very jealous of Romeo when Romeo is with other people. Mercutio brings humour and wit to the play which engages the audience. Mercutio is a typical young man of that period in the way that he is an honourable aristocrat, very independent and is free but on the other hand he isn't because he speaks badly about women and often refers to them as being fruit 'poperin pear'. The audience love the character Mercutio because he is humorous and often uses wordplay which interests the audience. Another reason is because Mercutio's character stands out from the rest and he is always living his life on the edge and always looking for something new and exciting to do and he is constantly playing on words, using two or more meanings. There are two main reasons Mercutio's character is important to 'Romeo and Juliet'. ...read more.

Mercutio never reveals his true emotions and he admits this 'give me a case to put my visage in: a visor for a visor' and because of this we never know if he is being himself. Mercutio constructs a large 'Queen Mab' speech which is based on dreams and fantasies which are granted by an imaginary fairy, he uses this speech to convince Romeo to attend the feast. In this speech all of Mercutio's ideas come out and make the speech seem unrealistic, however this speech brings excitement into the scene. In this speech Mercutio uses a lot of metaphors to make us realise what he is talking about and he also uses techniques to persuade Romeo. As shown in this speech, Mercutio is very imaginative. He describes in intimate detail everything. The audience really appreciate Mercutio in this scene because whereas Romeo is love-sick and sorrowful, Mercutio is enjoying himself and because of this we can compare them as opposites which is why Mercutio is included in this scene. In Act 2 Scene 1 Mercutio is annoyed with Romeo because Romeo deserted him at the Capulet's feast 'you gave is the counterfeit fairly last night'. Romeo and Mercutio seem to have exchanged roles and Mercutio uses sexual wordplay and bawdy language to describe Rosaline and women, 'by her high forehead and ...read more.

In this scene Mercutio is being very serious which is unusual for him but he still manages to play on words 'find me a grave man'. Mercutio is really miserable in this last scene and when he describes Benvolio he is really describing Tybalt's actions and he is annoying him, and how Romeo could have prevented this if he hadn't got married. He is also being witty and is once again provoking Tybalt.When Mercutio says 'a plague, o' both your houses!' it makes the audience feel sympathy for Mercutio and makes the scene more emotional. Mercutio's character is a very likeable one; he is humorous and engages the audience no matter what his actions are. A modern audience wouldn't particularly react any different to the audience in Shakespeare's time although the women nowadays may dislike Mercutio's character due to the bad language that he uses whilst referring to them. In conclusion, Mercutio's character is obviously very superior and essential for the humour of this play. He represents independence, youth, and freedom, and makes the story line a lot more interesting. The character of Mercutio achieves the effect that Shakespeare intended which was that he would bring a different interest into the play due to the character of Mercutio. ...read more.