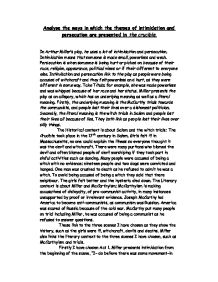 Analyse the ways in which the themes of intimidation and persecution are presented in &quot;The Crucible&quot;.

Analyse the ways in which the themes of intimidation and persecution are presented in the crucible. In Arthur Miller's play, he uses a lot of intimidation and persecution. Intimidation means that someone is made small, powerless and weak. Persecution is when someone is being hurt or picked on because of their race, religion, appearance, political views or if their different to everyone else. Intimidation and persecution link to the play as people were being accused of witchcraft and they felt powerless and hurt, as they were different in some way. Take Tituba for example, she was made powerless and was whipped because of her race and her status. Miller presents the play as an allegory, which has an underlying meaning as well as a literal meaning. Firstly, the underlying meaning is the McCarthy trials towards the communists, and people lost their lives over a dishonest politician. Secondly, the literal meaning is the witch trials in Salem and people lost their lives all because of lies. They both link as people lost their lives over silly things. The Historical context is about Salem and the witch trials; The Crucible took place in the 17th century in Salem. Girls felt ill in Massachusetts, no one could explain the illness so everyone thought it was the devil and witchcraft. ...read more.

Tituba loses her power "terrified falls to her knees" Tituba's scared she doesn't want to get hurt so she falls on her knees with no power and confesses, this is intimidation as she feels small and is literarily small, she wants someone to comfort her like her childhood. Tituba lies to save her life. Hale is trying to get answers out of Tituba, "Who came to you with the devil? Two? Three? Four? How many?" Hale is asking short questions to find out about the devil, before the quote stage directions said kindly this shows Hale wasn't trying to scare Tituba. Tituba is getting all the attention and Abigail is jealous "I want to open myself ... I want the light of God" Abigail has changed her mind as earlier Abigail said she never called the devil. Then Betty wakes and started shouting names that she supposedly saw with the devil. The curtain falls with hysteria. Secondly I have chosen Act 2. It begins eight days after the girls were found dancing in the forest. John lies, "It's well seasoned." This shows the lack of trust and honesty between John and Elizabeth as earlier John adds a pinch of salt into the pot. There's tension between John and Elizabeth, "he gets up, goes to kiss her, kisses her. ...read more.