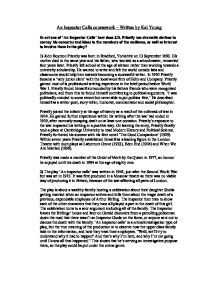 Analysis of 'An Inspector Calls'

An Inspector Calls coursework - Written by Kai Young In act one of 'An Inspector Calls' how does J.B. Priestly use dramatic devices to convey his concerns and ideas to the members of the audience, as well as interest to involve them in the play? 1) John Boynton Priestly was born in Bradford, Yorkshire on 13 September 1893. His mother died in the same year and his father, who worked as a schoolmaster, remarried four years later. Priestly left school at the age of sixteen rather than working towards a university scholarship. He wanted to write and felt the world outside labs and classrooms would help him towards becoming a successful writer. In 1910 Priestly became a 'very junior clerk' with the local wool firm of Helm and Company. Priestly gained most of is professional writing experience in the brief period before World War I. Priestly found himself surrounded by his fathers friends who were recognized politicians, and from this he found himself contributing to political arguments. 'I was politically-minded to some extent but never able to put politics first.' He described himself as a writer-poet, story-teller, humorist, commentator and social philosopher. Priestly joined the infantry at the age of twenty as a result of the outbreak of war in 1914. ...read more.

Otherwise, there's a muddle." The Inspector starts by showing the photograph of Eva Smith to Birling and makes it clear that he only wants Birlings' input. This continues with separate questioning throughout Act One. 4) At the beginning of act one it is clearly apparent that Inspector Goole has arrived to retrieve some information, here is the first example. "I'd like some information, if you don't mind, Mr Birling". When the Inspector arrives Birling seems very tentative, mainly because he doesn't know who Inspector Goole is, so he asks him questions regarding when he was transferred to Brumley Police Force. "You're new, aren't you", he continues to explain that he was on the bench and knew the force pretty well. We can see that Birling has become worried when he starts to become impatient. "(After a pause, with a touch of impatience) Well, what is it then?" The Inspector is constantly asking questions to all of them throughout Act One to gather as much information about the family as possible, and if you continue to the end of the play you'll realise why he's doing this. The Inspector obviously doesn't know the family so he asks questions. "And what had this girl done to make you lose your temper?" ...read more.

One of the key differences is that the social class divide has decreased since World War II has ended. In the play, the Birlings are rich and they have used the lower and working class people for labour and haven't treated them well, like Eva Smith. "Yes, I do. She was one of my employees and I discharged her". This shows that Mr Birling does not care for the lower class and that he treats them without respect. In 1945, after the world wars, the social class was a lot better, the upper and lower classes worked together to bring the country back up again, but there are still some cases of class divide even today. 9) In conclusion, the playwright uses dramatic devices to change my overall opinion about the Birlings. J.B. Priestley uses a number of ways to keep the audience interested in his play. He mainly uses insight and historical context. He also makes it so the audience partly knows what is going to happen next whilst the characters do not. I think that the playwright's message is that we should all get along with each other and to treat every class of individual with the same respect that we desrve ourselves. It is still occurant that people treat others without respect and this shouldn't be tolerated. This is the sort of behaviour that J.B. Priestly wanted to get rid of. ...read more.