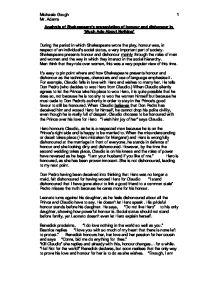 Analysis of Shakespeare's presentation of honour and dishonour in 'Much Ado About Nothing' During the period in which Shakespeare wrote the play, honour was, in respect of an individual's social status, a very important part of society. Shakespeare presents honour and dishonour mainly through the roles of men and women and the way in which they interact in the social hierarchy. Men think that they rule over women, this was a very popular view of this time. It's easy to pin point where and how Shakespeare presents honour and dishonour as the techniques, characters and use of language emphasise it. For example, Claudio falls in love with Hero and wishes to marry her. He tells Don Pedro (who decides to woo Hero from Claudio.) When Claudio silently agrees to let the Prince take his place to woo Hero, it is quite possible that he does so, not because he is too shy to woo the woman himself but because he must cede to Don Pedro's authority in order to stay in the Prince's good favour to still be honoured. ...read more.

He doesn't let Hero speak. His prideful honour stands before his daughter. He says, "Do not live Hero" to his only daughter, showing how powerful honour is. Social status should not stand before family, yet Leonato doesn't even let Hero explain herself. Benedick proclaims, "I do love nothing in the world so well as you." Beatrice replies "I love you with so much of my heart that there is none left to protest." Benedick honours her, her love and her passion for her cousin and says "Come, bid me do anything for thee." "Kill Claudio" she replies and already with this, honour changes... for a while. "Ha! Not for the world!" Benedick declares, but soon realises that the only way to prove his love and honour for her is to do as she wishes. "Enough, I am engaged. I will challenge him." We find that honour between Beatrice and Benedick is a way proving their love, or at least Benedick's way of proving his love for her. ...read more.

"I thank thee for thy care and honest pains." It is then that Shakespeare wants the audience to see that honour, without pride is what counts. The Friar is a very respected and honoured character, this obviously because of his occupation. He is the one bringing hope to Leonato and Hero being as they were before the misunderstanding. Everyone honours Friar for proving Hero's innocence. The idea of a trustworthy authority in the play and in this society is that God is the ultimate authority; only He or his representatives can challenge Don Pedro and Leonato. In conclusion, in 'Much Ado About Nothing,' Shakespeare presents honour through the characters of Dogberry and all the 'well respected' men as a contrast of what the 'well respected' men think the concept of honour is and what true honour really is. Dogberry represents true honour and the 'well respected' men such as Don Pedro, Claudio and Leonato represent what society of that period think the concept of honour is. Michaela Gough 1 Mr. Adams ...read more.