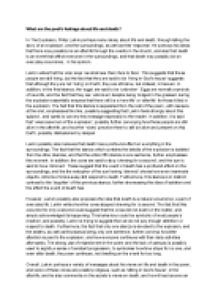 Analysis of The Explosion by Philip Larkin

Transfer-Encoding: chunked ﻿What are the poet's feelings about life and death? In The Explosion, Philip Larkin portrays many ideas, about life and death, through telling the story of an explosion, and the surroundings, as well as their response. He portrays his ideas that there may possibly be an afterlife through the events in the church, and also that death is an event that affect everyone in the surroundings, and that death may possibly be an everyday occurrence, in his opinion. Larkin writes that the vicar says ?we shall see them face to face?. This suggests that these people are still living, but the fact that they are said to be ?living in God?s house? suggests that although they are not ?living? on Earth, they are still alive, but instead, in heaven. ...read more.

Larkin possibly also believes that death has a profound effect on everything in the surroundings. The fact that the stanza which contains the details of the explosion is isolated from the other stanzas, and that the entire fifth stanza is one sentence, further emphasises this moment. In addition, the cows are said to stop ?chewing for a second?, and the sun is said to have ?dimmed?. These suggest that the event of death has a profound effect on the surroundings, and the the metaphor of the sun having ?dimmed? shows how even inanimate objects, millions of miles away still respond to death. Furthermore, this stanza is in distinct contrast to the ?laughter? of this previous stanza, further showcasing this idea of isolation and the effect the event of death has. ...read more.

The strong use of enjambment in the poem and the lack of caesura is possibly used to signify a sense of constant progression, to symbolise how time stops for no one, and even after death, the poem continues, not dwelling on the event for too long. Overall, Larkin portrays a variety of messages about his views on life and death in the poem, and some of these views are possibly religious, such as ?sitting in God?s house?, in the afterlife, and he also comments on the society?s views on death, and how it has become an everyday occurrence, and so is no longer paid much attention, but can still have a profound effect. ...read more.

This student written piece of work is one of many that can be found in our GCSE Philip Larkin section.