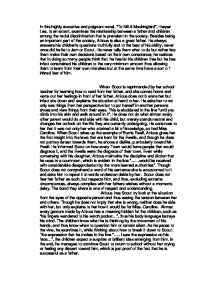 Analysis - To Kill A Mockingbird

In this highly evocative and poignant novel, "To Kill A Mockingbird", Harper Lee, to an extent, examines the relationship between a father and children among the racial discrimination that is prevalent in the society. Besides being an important part of the society, Atticus is also a great father. He always answers his children's questions truthfully and to the best of his ability, never once did he lie to Jem or Scout. He never tells them what to do but rather lets them make their own decisions based on their own conscience; he realizes that in doing so many people think that he has let his children free but he has infact constrained his children to the very minimum amount thus allowing them to learn from their own mistakes but at the same time have a sort of inbred fear of him. ...read more.

He construes to her that it was not only her who attained a bit of knowledge, so had Miss Caroline. When Scout takes up the example of Burris Ewell, Atticus gives her the first insight into the laws that are bent for the Ewells, and though he does not portray detest towards them, he shows a dislike, particularly toward Mr. Ewell. He informed Scout on how every Town would have people that would disgrace it, and the Ewells were the disgrace of their town. Even while conversing with his daughter, Atticus maintains the discipline and diction that he uses in a courtroom, which is evident in the line "......would be received with considerable disapprobation by the more learned authorities". ...read more.

Caroline. Almost every gesture made by Atticus has a meaning hidden for the children, such as "his fingers wandered to his watch pocket...", thus his body language betrays his mind. The children know what he is thinking by the movement of his hands, and thus know when to question him or remain silent. As he paces to the vine, he examines it, while thinking about how to break it down to Scout. The expression that he makes in the line "..... I saw the expression on his face...", the children expect a surprise or brilliant idea emerging from him. In the end, he manages to convince Scout to return to school without her crying or feeling any dissent toward him, which is just proof of the fact that he is successful as a father. ...read more.