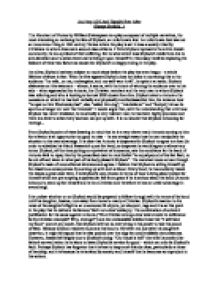 And they all lived happily ever after (except Shylock...), to what extent was Shylock's misfortune due to anti-Semitism and to what extent did he bring it upon himself?

And they All Lived Happily Ever After (Except Shylock...) The Merchant of Venice by William Shakespeare is a play composed of multiple narratives, the most interesting to me being the fate of Shylock, an unfortunate Jew. An unfortunate Jew was not an uncommon thing in 16th century Venice where the play is set: it was a society ruled by Christians to whom Jews were second class citizens. I think Shylock represents the entire Jewish community; he is a symbol of their suffering. But to what extent was Shylock's misfortune due to anti-Semitism and to what extent did he bring it upon himself? In this essay I will be exploring the balance of these two factors as causes for Shylock's unhappy ending in the play. As a Jew, Shylock has been subject to much abuse before the play has even begun - a whole lifetime of abuse in fact. When he first appears Shylock does not delay in conveying this to the audience: "he rails...on me, my bargains, and my well-won thrift", he spits in an aside. ...read more.

I believe that Shylock is setting himself up for disastrous consequences by coming up with such a blood-thirsty bond; he has suddenly raised the stakes a great deal. Here, it is Shylock's own choices in terms of how to bring about justice for himself which are pre-empting a spectacular fall from grace if he is serious about the bond (Antonio is bound to stand up for himself and he is a Christian and therefore he has an unfair advantage in everything). It is unclear whether or not Shylock would be prepared to follow through with the terms of his bond until his daughter, Jessica, runs away from home to marry a Christian. Shylock's reaction to the news of his daughter's flight is an uncensored fit of pure, yet eloquent, rage and it is as this point in the play that he delivers his famous 'Hath not a Jew' soliloquy. The combination of coherent justification for his cause against Antonio ("If a Christian wrong a Jew what should he sufferance be by Christian example? ...read more.

Therefore, I would say that in the end, and overall, it is the anti-Semitic culture in which he lives that leads to Shylock's downfall. Apparently, it was all right for Christians not to show any mercy and it was just Shylock who did not have the right to be ruthless. In conclusion, Shylock's unhappy ending is the result of his circumstances and of his choices (although obviously his choices are made harder for him by his circumstances). I stand by what I said: I think Shylock is a tolerant individual. The fact the he was in the end forced to become Christian, in my opinion, epitomises one of the major (maybe unintended) points of Shakespeare's play which is that being Jewish was not accepted. Whether Shakespeare empathised with Shylock we cannot know, although I have a strong hunch that he did (otherwise he would not have been able to write so powerfully from the perspective of Shylock). Personally, I am able to empathise with Shylock a great deal as I believe that he was put in an impossible position and in the end was only human. "Hath not a Jew hands, organs, dimensions, senses, affections, passions..." - of course he has. ...read more.