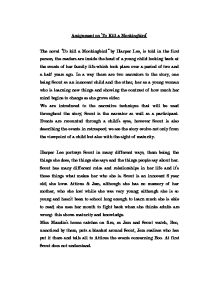 Assignment on To Kill A Mockingbird

Assignment on 'To Kill a Mockingbird' The novel "To kill a Mockingbird" by Harper Lee, is told in the first person, the readers are inside the head of a young child looking back at the events of her family life which took place over a period of two and a half years ago. In a way there are two narrators to the story, one being Scout as an innocent child and the other, her as a young woman who is learning new things and showing the contrast of how much her mind begins to change as she grows older. We are introduced to the narrative technique that will be used throughout the story; Scout is the narrator as well as a participant. ...read more.

Scout is an innocent 6 year old; she loves Atticus & Jem, although she has no memory of her mother, who she lost while she was very young; although she is so young and hasn't been to school long enough to learn much she is able to read; she uses her mouth to fight back when she thinks adults are wrong- this shows maturity and knowledge. Miss Maudie's house catches on fire, as Jem and Scout watch, Boo, unnoticed by them, puts a blanket around Scout, Jem realises who has put it there and tells all to Atticus the events concerning Boo. At first Scout does not understand. Scout is a daughter; she copes with being the only girl amongst all boys; she learns how to swear from a ...read more.

Even though Scout is the narrator, she does not fully understand the implications of her conversations with Miss Maudie, she thinks that Miss Maudie is accusing Atticus of drinking whisky, Miss Maudie's conversation with Miss Stephanie (Chapter 5, pgs50-51) is misunderstood. Scout as a minor is a very realistic character, we see her how she is, she is a innocent, yet clever six year old who knows what she's doing when she does it, she knows how to tell a person from just looking at them and she's often right. Whereas the older Scout is the same but to a different extent, she is more aware of things, and thinks before she acts, she has a humorous side to her which is shown at points through the novel. ?? ?? ?? ?? ...read more.