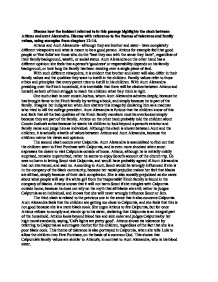 Discuss how the incident referred to in this passage highlights the clash between Atticus and aunt Alexandra. Discuss with reference to the themes of tolerance and family values, using examples from chapters 12-14. Atticus and Aunt Alexandra- although they are brother and sister- have completely different viewpoints and what is meant to be a good person. Atticus for example feel that good people or 'fine folks' are those who do the "best they can with the sense they have", regardless of their family background, wealth, or social status. Aunt Alexandra on the other hand has a different opinion: she feels that a person's 'goodness' or respectability depends on his family background, or how long the family has been residing over a single piece of land. With such different viewpoints, it is evident that brother and sister will also differ in their family values and the qualities they want to instill in the children. Family values refer to those ethics and principles that every parent tries to instill in his children. With Aunt Alexandra presiding over the Finch household, it is inevitable that there will be clashes between Atticus and herself, as both of them struggle to teach the children what they think is right. ...read more.

She is also socially prejudiced as she cares about what people will say if a white girl from the 'respectable' Finch family is found in the company of blacks. Atticus knows that it will not harm Scout if she mingles with Calpurnia outside home, because he does not rely on the myth that all blacks are evil; rather he judges Calpurnia as an individual, and knows that she will never wrongly influence Scout or Jem. The third clash is related to the previous one in the sense that it also concerns Calpurnia. Aunt Alexandra feels that the children are getting too close to Calpurnia, and she feels that this is not good because she is a mere black cook. She urges Atticus to fire Calpurnia, but for once Atticus refuses to comply and stands up to his sister, declaring that Calpurnia is an integral part of the household. Atticus looks beyond blood ties and skin color and judges Calpurnia by her high moral standards, saying, 'Cal's lights are pretty good'. Atticus shows his tolerance by referring to Calpurnia as a surrogate mother for the children, regardless of the fact that she is a poor black cook. ...read more.

This is a drastic contrast to Atticus's liberal parenting style, and the fact that he pays no heed to what society might think, and does what he thinks is right. Despite the fact that he is in the right, Atticus tolerates his sister's strong-headedness, and even tries to go along with her wishes where he can. On her insistence he tries to tell Jem and Scout to behave in a manner fitting of the Finches; he even tells Scout to apologize to her aunt when she is rude, even though Aunt had no right to interfere. Although Aunt appears inflexible and narrow minded, it must be kept in mind that her eagerness tom rear Jem and scout and her pride in the Finch name, shows that she cares deeply for the family. Although the clashes are shown between Aunt Alexandra and Atticus, it is actually a much greater struggle between two great forces. Aunt Alexandra represents the conservative side of Maycomb, and the inflexible, narrow-minded thinking of her time. Atticus, along with Calpurnia and his children depict a style of thinking too modern for that time; a feeling of tolerance and acceptance and the ability to look past a person's exterior. ...read more.