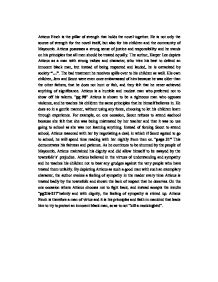 Atticus Finch is the pillar of strength that holds the novel together. He is not only the source of strength for the novel itself, but also for his children and the community of Maycomb.

Atticus Finch is the pillar of strength that holds the novel together. He is not only the source of strength for the novel itself, but also for his children and the community of Maycomb. Atticus possesses a strong sense of justice and responsibility and he stands on his principles that all men should be treated equally. The author, Harper Lee depicts Atticus as a man with strong values and character, who tries his best to defend an innocent black man, but instead of being respected and lauded, he is ostracized by society "...". ...read more.

"pg 98" Atticus is shown to be a righteous man who opposes violence, and he teaches his children the same principles that he himself believes in. He does so in a gentle manner, without using any force, choosing to let his children learn through experience. For example, on one occasion, Scout refuses to attend a\school because she felt that she was being mistreated by her teacher and that it was no use going to school as she was not learning anything. Instead of forcing Scout to attend school, Atticus reasoned with her by negotiating a deal, in which if Scout agreed to go to school, he will spend time reading with her nightly from then on. ...read more.

By depicting Atticus as such a good man with such an exemplary character, the author evokes a feeling of sympathy in the reader every time Atticus is treated badly by the townsfolk and shown the lack of respect that he deserves. On the one occasion where Atticus chooses not to fight back, and instead accepts the insults "pg216-217"calmly and with dignity, the feeling of sympathy is stirred up. Atticus Finch is therefore a man of virtue and it is his principles and faith in mankind that leads him to try to protect an innocent black man, so as to not "kill a mockingbird". ...read more.