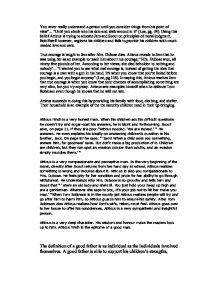 Atticus is a very deep character. His wisdom and honour make the readers look up to him. Atticus Finch is the epitome of a good man.

You never really understand a person until you consider things from his point of view"... "Until you climb into his skin and walk around in it" (Lee, pg. 34). Using this belief Atticus is trying to educate Jem and Scout on principles of moral judgment. Bob Ewell however, neglects his children and fails to provide his children with much needed love and care. True courage is taught to Jem after Mrs. Dubose dies. Atticus reveals to Jem that he was using her as an example to teach him about true courage; "Mrs. Dubose won, all ninety five pounds of her. According to her views, she died beholden to nothing and nobody"... "I wanted you to see what real courage is, instead of getting the idea that courage is a man with a gun in his hand. It's when you know that you're licked before you begin, and you begin anyway" (Lee, pg.116). In saying this, Atticus teaches Jem that true courage is when you know that your chances of accomplishing something are very slim, but you try anyway. ...read more.

"When Tom Robinson is in the county jail Atticus realizes people will try and go after him to harm him, so Atticus guards him to ensure his safety. After Tom Robinson dies Atticus realizes how Tom's wife, Helen, must feel. Atticus goes over to her house to offer his condolences. Atticus is a very sympathetic and insightful person. Atticus is a very deep character. His wisdom and honour make the readers look up to him. Atticus Finch is the epitome of a good man. The definition of a good father is as individual as the individuals involved themselves. A good father is able to support his children's strengths, along with being able to help them overcome their weaknesses. He is able to do this without appearing to be a know-it-all. The ability to show by example how to live life, while not being afraid to make mistakes and not to be perfect all the time are also very important characteristic. ...read more.

He tried his best to teach his children that some people can only feel good about themselves when they attempt to make someone else feel bad. Atticus taught many lessons to Scout and Jem one being the reality of prejudice and many others but how he did it was the key. He was not straight forward as in he did not make a point of telling them what was right and what was wrong or why certain people acted certain ways. His way of teaching his children were to wait until Scout or Jem came to him instead of having him tell hem right there and then when he saw what they had been doing. He let his children decide for themselves whether or not to come to him about there problems. For instance he had seen the game that dill Jem and scout had been playing the Boo Radley game he very well new what they were doing., He asked them what they were paying knowing the answer would be anything but the truth and kept along knowing that Jem or scout would soon come to him and ask him what was the deal with Boo. ...read more.