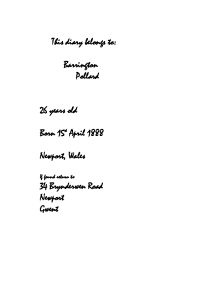 This diary belongs to: Barrington Pollard 26 years old Born 15th April 1888 Newport, Wales If found return to 34 Brynderwen Road Newport Gwent 14th September 1914, Today has been very wet and cold, but today was a great day, all my friends got together down the local pub for our last drink before we go to war. My best friend Arthur Gram was joining the R.R.W (Royal Regiment of Wales) as I was. At 1300 hours my brother came to the pub to get me to pack my bags. My brother is twelve and his name is Patrick. I also have a sister who is eleven her name is Lynette. My mum is a nurse at St. Wollos Hospital her name is Carol. I will be visiting her tomorrow before I leave. I have a girlfriend called Venessa who is twenty-five I have known her since I was five. She moved here from England. ...read more.

There is a small abandoned village near here where another British regiment is camping until they get called to go to fight. The journey on the way here was not too bad but the worst part was on the naval ship it was so cramped. We are on the beach in France, I do not know the exact place because we were not listening, but what I do know is tomorrow we will be marching to the front line. Everyone sighed when we heard the dreaded word march. The beach is better than ours I would love to live here with my family it would be nice. On the way here Arthur and I had a conversation about the war. We were saying that the Germans are just like us, they are only doing their job. Arthur said our two leaders should just have a fight, which would save a lot of time and lives; people at home are even making money by betting on who will win. ...read more.

21st September 1914 This diary is being finished by R M Taylor. Barrington Pollard sadly died in the truck on the way to join another British regiment. The truck, which was carrying forty-eight people included Barrington. There were six trucks in convoy and they all got bombed, except for the one which I was in. The reason that I did not get bombed was that our truck had broken down again. When we went through the kit bags I noticed Barrington's diary so I have taken the liberty of completing it. I knew Barrington for fifteen years. He was a good man. When we were at home he liked to go down the local pub all the time. There is so much I would like to say but time and our situation does not allow for this. He had a wonderful family, but sadly I am the one who will have to break the news to them. The time and date of his death was 1304 hours 20th September 1914. ...read more.