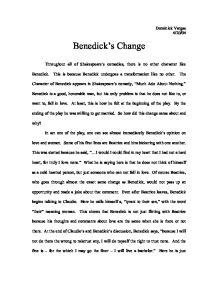 Benedick's Change in Much Ado About Nothing

Dominick Vargas 4/20/04 Benedick's Change Throughout all of Shakespeare's comedies, there is no other character like Benedick. This is because Benedick undergoes a transformation like no other. The Character of Benedick appears in Shakespeare's comedy, "Much Ado About Nothing." Benedick is a good, honorable man, but his only problem is that he does not like to, or want to, fall in love. At least, this is how he felt at the beginning of the play. By the ending of the play he was willing to get married. So how did this change came about and why? In act one of the play, one can see almost immediately Benedick's opinion on love and women. Some of his first lines are Beatrice and him bickering with one another. This was started because he said, "...I would I could find in my heart that I had not a hard heart, for truly I love none." What he is saying here is that he dose not think of himself as a cold hearted person, but just someone who can not fall in love. Of course Beatrice, who goes through almost the exact same change as Benedick, would not pass up an opportunity and made a joke about that comment. ...read more.

Now he is changing his words from what he said at the beginning of the play. Beatrice then appears and says, "against my will I am sent to bid you come into dinner." Now Benedick is acting like all stereotypical men who first fall in love and he jokes around with her saying, "you take pleasure then in the message." Beatrice wittily responds with, "yea, just so much as you may take upon a knife's point and choke a daw withal." Now there is a difference in views because Benedick believes that Beatrice loves him but Beatrice however does not. When she leaves he says that Beatrice has a "double meaning" in her message. That is a common action amongst newfound lovers. They start looking too deep and overanalyze what the other person is saying. Ultimately by the end of the play Benedick is really in love with her. He begins to write her poetry and he is thinking about her. The poetry he writes however is really bad. This is because the play is a comedy and Shakespeare needed to keep the comic relief in the script. ...read more.

The point that Shakespeare was trying to make is that love at first sight is not what it is always cracked up to be. This shows that at the root of Hero and Claudio's relationship lies not only love, but jealousy and mistrust. Now as portrayed in the beginning of this essay, the relationship between Benedick and Beatrice was a much slower start. Then when the seeds of love were planted they began to contemplate if their love is true or not. So their love was actually thought about before hand. This is why at the end when Beatrice asked Benedick to prove his love, Benedick said he would. So one can say that the relationship between Benedick and Beatrice is much more stable than the relationship between Claudio and Hero. This is the point that Shakespeare was trying to make by showing the reader the complete development and change in Benedick and Beatrice's views on love. So as one can see, Benedick went from the sworn bachelor to a loving husband. This was not easy for him to do but when all was said and done, he was happy to be married. In the end both couples got married, but Shakespeare cleverly shows how love at first site is flawed. ...read more.