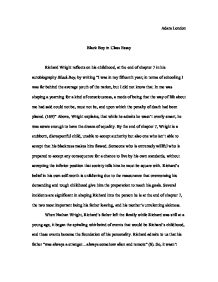 Black Boy - How Richard has grown

Adam London Black Boy in Class Essay Richard Wright reflects on his childhood, at the end of chapter 7 in his autobiography Black Boy, by writing "I was in my fifteenth year; in terms of schooling I was far behind the average youth of the nation, but I did not know that. In me was shaping a yearning for a kind of consciousness, a mode of being that the way of life about me had said could not be, must not be, and upon which the penalty of death had been placed. (169)" Above, Wright explains, that while he admits he wasn't overly smart, he was aware enough to have the dream of equality. By the end of chapter 7, Wright is a stubborn, disrespectful child, unable to accept authority but also one who isn't able to accept that his blackness makes him flawed. Someone who is extremely willful who is prepared to accept any consequence for a chance to live by his own standards, without accepting the inferior position that society tells him he must be square with. ...read more.

expressed his confusion towards society, "Watching the white folk eat would make my empty stomach churn and I would grow vaguely hungry. Why could I not eat when I was hungry? Why did I always have to wait until others were through? I could not understand why some people had enough food and others did not. (19)" We see even as an extremely young child Richard struggles to accept that he is flawed to due skin color and economic status. His dad's absence also leads to an environment that limits his experiences to boredom, hunger, fear, and hate so imagination becomes his defence system against the affects of reality and help assist Richard with his education. Another major factor in the outcome of his beliefs was his mother's unrelenting sickness. After his mothers second paralytic stroke, while Richard is summarizing his feelings towards his mother's illness, he illustrates some of his key beliefs, "My mother's suffering grew into a symbol in my mind, gathering to itself all the poverty, the ignorance, the helplessness, the painful, baffling, hunger-ridden days and hours; the restless moving, the futile seeking, the uncertainty, the fear, the dread, the meaningless pain and the endless suffering. ...read more.

And because of this, even after she fell sick, Richard was prepared for and situation that could possibly arise. But through his mother's sickness Richard comes to a revelation that gives him a justified reason to fight for equality. The reason he had is "a conviction that the meaning of living came only when one was struggling to wring a meaning out of meaningless suffering," (100). Here Richard says, through his mom he learned that he doesn't have the right to reach his goals, he has to fight for them. He realized that life is only meaningful when we make it meaningful, and by being the stereotypical black boy even though he was truly immensely brilliant wouldn't make his life significant. So perhaps, these were the most two important events in shaping who Richard is as he reflects on the first 15 years of his life. Possibly because while his mother prepared him for any situation, his father set him up and lit the flame that "lifted [him] up in its burning arms and borne [him] toward alien and undreamed-of shores of knowing, (35)." ...read more.