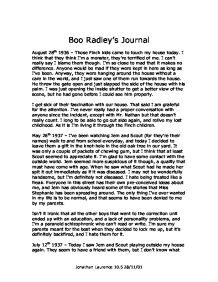 Boo Radley's Journal August 28th 1936 - Those Finch kids came to touch my house today. I think that they think I'm a monster, they're terrified of me. I can't really say I blame them though. I'm so close to mad that it makes no difference. Anyone would be mad if they were kept in here as long as I've been. Anyway, they were hanging around the house without a care in the world, and I just saw one of them run towards the house. He threw the gate open and just slapped the side of the house with his palm. I was just opening the inside shutter to get a better view of the scene, but he had gone before I could see him properly. I get sick of their fascination with our house. That said I am grateful for the attention. I've never really had a proper conversation with anyone since the incident, except with Mr. Nathan but that doesn't really count. I long to be able to go out side again, and relive my lost childhood. As it is I'm living it through the Finch children. May 26th 1937 - I've been watching Jem and Scout (for they're their names) walk to and from school everyday, and today I decided to leave them a gift in the knot-hole in the old oak tree in our yard. ...read more.

For the first time I think that they want me to come out, just out of curiosity. However, I don't think that they know that whilst they can see me, I can see them as well. I'm not sure how they'd act if they knew I watched them. Jem's becoming more and more suspicious of me though. He's definitely got his head screwed on properly. I think that he'll work out what's happening soon enough. July 22nd 1937 - A historic day. They were trying to give me a letter! I saw them approaching into our yard, and I saw Jem holding a ten-foot fishing pole. The letter was attached to it. Unfortunately I didn't have any chance to obtain it. Jem was standing on the edge of the yard, waving the fishing pole in the air. The only problem was, his arms weren't long enough to control the fishing pole properly, and it kept falling to the floor. If only he had the strength to hold it in the air, I would've been able to come and collect it. At the exact moment when I was opening the shutters to come out and collect it, their dinner bell started ringing and the chance was gone. I have a terrible feeling that they'll stop trying to contact me now. ...read more.

Next time I would've left them a letter and told them all about it. I can't believe him. All the time I've thought that he was trying to wreck my life and this event has confirmed it. The only time I'll ever get to leave this house is when I'm carried out dead. Actually no, it won't be. I've proved that I can have contact with the outside world, and I relished ever minute of it. When the time is right I might try to do it again. When Mr. Nathan's guard is down. November 29th 1937 - Another momentous occasion. I found myself woken in the night by Mr. Nathan, and I realized instantly that there was something wrong. I looked around out of the front window and I saw to my horror that Mrs. Maudie's house was ablaze. Then I saw Scout and Jem outside, looking frozen to the skin. Just one look at their lifeless figures made me feel like I had to do something. I quickly inspected the room, and saw an old blanket. Creeping outside unnoticed, I lightly dropped the blanket over Scout's pale frame. She didn't notice it for a while, but when she did she appreciated it. It's a wonderful thing, doing thing for other people, and there's no feeling in the world better. My level of contact with the outside world has risen from non-existent to minimal, and it can only increase further. Let's just hope I get to meet them soon enough. Jonathan Laurence 10.5 28/11/01 ...read more.