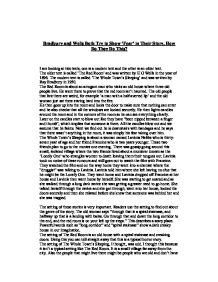 Bradbury and Wells Both Try to Show 'Fear' in Their Story. How Do They Do This?

Bradbury and Wells Both Try to Show 'Fear' in Their Story. How Do They Do This? I am looking at two texts, one is a modern text and the other is an older text. The older text is called 'The Red Room' and was written by H G Wells in the year of 1896. The modern text is called 'The Whole Town's Sleeping' and was written by Ray Bradbury in 1950. The Red Room is about an arrogant man who visits an old house where three old people live. He went there to prove that the red room isn't haunted. The old people that live there are weird, for example 'a man with a half averted lip' and the old woman just sat there staring hard into the fire. He then goes up into the room and locks the door to make sure that nothing can enter and he also checks that all the windows are locked securely. He then lights candles around the room and in the corners of the room so he can see everything clearly. Later on the candles start to blow out like they have "been nipped between a finger and thumb", which implies that someone is there. ...read more.

Readers might worry about Lavinia because she is opposite to Lavinia and makes her stand out more. In the Red Room H G Wells, I think, use language well to emphasis the genre, for example he mentions the word 'ghost' in the first sentence. He uses language to make us feel frightened by using lexis to make a picture in the reader's mind allowing the reader to pretend that he/she is the main character and so feel what they feel (empathy) for example the texts uses phrases like 'Long corridor', 'Unnatural' and 'dark against the fire light'. This makes a picture in our mind and we know what is happening. This also makes us feel uncomfortable because we don't know what to expect (it is unpredictable), so this makes us feel more scared and more questions go through our mind like 'What will happen next?' and 'Are the old people at all involved with this?' These kinds of questions makes the reader expect bad thing to happen. This continues as he describes setting in more and more detail. This also helps build tension because he slows down the story a bit here and people can make a clearer picture in their mind so they feel for the character more. ...read more.

All factors which make a good story, i.e. structure, theme, characters and language were all used creatively to build tension in both texts. These stories were similar by having the same genre, theme, type of character and aim of trying to scare the reader. The differences were different settings and different audience expectations depending on the time period. More people in the time The Red Room was written were uneducated, poor, unskilled and working class but a few of them could read. There were close-knit communities with generations of the same family living in the same area, which meant that everyone knew everyone's history. People were very religious and had to move if they did anything seen to be 'wrong'. People also believed in the Supernatural and they believed that they would be punished by god if they did anything wrong. This was reflected in the story. The people in the time when The Whole Town's Sleeping tended to be more literate. More people wanted to read realistic stories about people more like them. They were less likely to believe in ghosts and punishments by god. The reason for these differences is that the writers were influenced by the time they were writing in and they knew what people wanted and believed in their time period. ...read more.