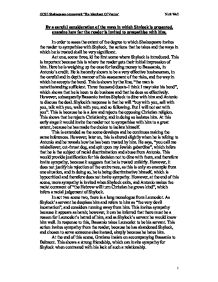 By a careful consideration of the ways in which Shylock is presented, examine how far the reader is invited to sympathise with him.

By a careful consideration of the ways in which Shylock is presented, examine how far the reader is invited to sympathise with him. In order to asses the extent of the degree to which Shakespeare invites the reader to sympathise with Shylock, the actions that he takes and the ways in which he is treated shall be very significant. Act one, scene three, id the first scene where Shylock is introduced. This is important because this is where the reader gets their initial impression of him. Here he is weighing up the case for lending money to Basssanio, in Antonio's credit. He is instantly shown to be a very effective businessman, in the careful and in depth manner of his assessment of the risks, and the way in which he accepts the bond. This is shown by the line, "the man is notwithstanding sufficient. Three thousand ducats-I think I may take his bond", which shows that he is keen to do business and that he does so effectively. However, subsequently Bassanio invites Shylock to dine with him and Antonio to discuss the deal. Shylock's response is that he will "buy with you, sell with you, talk with you, walk with you, and so following. But I will not eat with you". This is because he is a Jew and rejects the opposing Christian religion. This shows that he rejects Christianity, and in doing so isolates him. ...read more.

However, this is again changed as the scene develops. Jessica decides to leave Shylock to marry Lorenzo, thus converting her religion also, as Lorenzo is a Christian. This is shown by the line "I have a father, you a daughter lost", which shows that she had completely rejected not only him but also his religion. This is doubly insulting to Shylock, because not only had he lost his daughter, but she is also rejecting his religion to marry one of the people he hates, i.e. a Christian. This is multiplied in the next scene, when Jessica steals Shylock's ducats for her and Lorenzo. This invites even more sympathy, because as a businessman, his money will be very important to him, and now he had lost his daughter and his money. This is extended further with an emotional speech from Shylock concerning his position as a Jew, after hearing about Antonio's loss of means of repaying him. In it he says, how he has been laughed at because of his losses, mocked because of his gains, "cooled mine friends, and heated mine enemies", and the reason is because he is a Jew. He goes on to say, "hath a Jew hands, organs, dimensions, senses, affections, passions...if you prick us, do we not bleed?" This shows that he is deeply upset, and that he feels the subject of strong racial discrimination. ...read more.

This shows that he accepts the laws of Venice and shall not plead against them. Furthermore, his loss is subsequently increased so that he looses all his possessions. This appears as perhaps too harsh, because, as he says, they have taken the "prop that doth sustain my house, you take my life, when you do take the means by whereby I live". This shows that not only has his extreme desire not been satisfies, but also in the process he has lost everything that sustains his life. In addition to his previous losses of friends and his daughter, Shylock is now left with nothing, which invites sympathy from the reader because of the huge losses he has incurred. However, the fact that he was given the chance in each situation to prevent the consequences through showing mercy and acceptance, significantly reduces his sympathy. In conclusion, the reader is invited to feel a large degree of sympathy for Shylock because of the huge losses he appropriates and the fact that a lot of this is based upon racial discriminations and prejudices. However, this sympathy is dramatically reduced due to his reactions to others and the fact that he is given many chances to show understanding, which would have prevented the losses. Furthermore, he is shown to be equally racially prejudiced towards others anyway, which appears hypocritical. GCSE Shakespeare coursework 'The Merchant Of Venice' Nick Wall 1 1 ...read more.