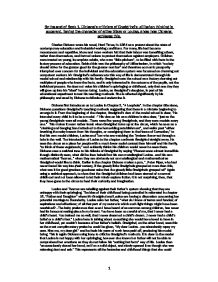 By the end of Book 1, Dickens's criticism of Gradgrind's utilitarian thinking is apparent. Taking the character of either Sissy or Louisa, show how Dickens achieves this.

By the end of Book 1, Dickens's criticism of Gradgrind's utilitarian thinking is apparent. Taking the character of either Sissy or Louisa, show how Dickens achieves this. Charles Dickens wrote his novel, Hard Times, in 1854 as a protest about the state of contemporary education and industrial working conditions. For many, life had become monotonous and repetitive. More and more workers felt that their labour was benefiting others, rather than themselves, and formed unions to protect themselves against employers. Children were treated as young, incomplete adults, who were "little pitchers", to be filled with facts in the factory process of education. Behind this was the philosophy of Utilitarianism, in which "society should strive for the greater good for the greater number" and therefore economic prosperity triumphed over concern for the individual and the education system was focussed on churning out competent workers. Mr Gradgrind's adherence to this way of life is demonstrated through his model school and relationship with his family. Gradgrind sees the school as a factory churning out multiples of people who know the facts, and is only interested in the outcome of the pupils, not the individual process. He does not value his children's upbringing or childhood, only that one day they will grow up into his "ideal" human being. Louisa, as Gradgrind's daughter, is part of his educational experiment to test his teaching methods. She is affected significantly by his philosophy and used by Dickens to ridicule and undermine it. Dickens first introduces us to Louisa in Chapter 3, "A Loophole". In the chapter title alone, Dickens questions Gradgrind's teaching methods suggesting that there is a mistake beginning to emerge in it. From the beginning of the chapter, Gradgrind's view of the model school is clear, "He intended every child in it to be a model -" His view on his own children is also clear, "just as the young Gradgrinds were all models...There were five young Gradgrinds, and they were models every one." ...read more.

In chapter 9, "Sissy's Progress", Sissy says, "it would be a fine thing to be you, Miss Louisa...I should not be the worse", to which Louisa says, "I do not know that". This is a good example of Dickens using Louisa to challenge Gradgrinds way of thinking. She is saying she is not happy with herself and her life which Gradgrind perceives to be unblemished. Louisa is fascinated by the relationship between Sissy and her father. She asks, "did your father love her...Tell me more about him...And you were his comfort through everything?...And your father was always kind? To the last?" She repeatedly questions her about this relationship, "with a strong, wild, wondering interest peculiar to her...contravening the great principle, and wondering very much." Sissy has allowed Louisa to let out her emotions for the first time, "an interest gone astray like a banished creature, and hiding in solitary places." She is so captivated by their bond as she has never been exposed to such a relationship with her father. Louisa would love to be close to her father like Sissy was with hers. Whilst talking to Sissy, "Louisa has a brighter laugh than usual" showing that Sissy makes her happy. Mr Gradgrind thinks Sissy is a bad example for his children, when in fact she is making Louisa happier and brings her out of her shell. Louisa admires Sissy and her ability to voice her feelings, but she is also jealous of her, "You are more useful to my mother, and more pleasant with her than I can ever be...you are pleasanter to yourself than I am to myself" Gradgrind's own daughter is jealous of someone who has not been moulded by his manipulative education. Dickens also criticises Gradgrind through the relationship between Louisa and Thomas. In chapter 3 when they are first brought into the plot, they are immediately shown to be contrasting characters. ...read more.

Louisa on the other hand is given passionate and emotionally complex dialogue and is described more human terms, suggesting to the reader that she is in a genuine struggle to stay alive. By the end of Book One it is not at all clear how the dynamic between Louisa and Gradgrind will develop, as they have been established as such opposite characters. At the end of Book Two, Mr Gradgrind and Louisa have another meeting, parallel to the first. The chapter, "Down" is set up exactly the same as "Father and Daughter". However, in this meeting Gradgrind reacts to and treats Louisa differently. Louisa once again expresses how unhappy she is to her father, making it impossible for him to ignore it any longer, "I curse the house in which I was born to have such a destiny...I have almost repulsed and crushed my better angle into a daemon." It is here spelt out to the reader that Gradgrinds suppressive ways have completely shattered what could have been a "million times wiser, happier, and more loving, more contented, more innocent and human in all good respects" in Louisa. Eventually Gradgrind "saw a wild dilating fire in the eyes steadfastly regarding him." Louisa's unhappiness has got to this extent before Gradgrind even has a glimpse of her suppressed spirit. At the very end of the chapter, Louisa breaks down saying "I shall die if you hold me! Let me fall upon the ground." Gradgrind "laid her down there, and saw the pride of his heart and the triumph of his system, lying, an insensible heap, at his feet" Gradgrind has had to watch all of his hard work shatter before him, in the form of his own daughter. This is the ultimate point at which Dickens is criticising the Utilitarian philosophy. It is immensely heartening when Gradgrind capitulates at the end of the novel, as he realises the error of his thinking. However, for Louisa, it is too late and she is never truly fulfilled in the way the reader believes she might be. ?? ?? ?? ?? 1 ...read more.