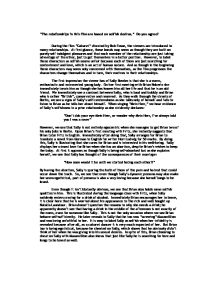 Cabaret - &amp;#147;The relationships in this film are based on selfish desires&amp;#148;&amp;nbsp;Do you agree?

"The relationships in this film are based on selfish desires." Do you agree? During the film "Cabaret" directed by Bob Fosse, the viewers are introduced to many relationships. At first glance, these bonds may seem as though they are built on purely self indulgent pleasures and that each member of the relationship are just taking advantage of the other, just to get themselves in a better position. However, to label these characters as selfish seems unfair because each of them are just searching for contentment and love, which is an act of human nature. And as though in the beginning these characters may seem only concerned with themselves, as the film progresses the characters change themselves and in turn, their motives in their relationships. The first impression the viewer has of Sally Bowles is that she is a warm, enthusiastic and extroverted young lady. On her first meeting with Brian Roberts she immediately treats him as though she has known him all her life and that he is an old friend. ...read more.

Even though it isn't blatantly obvious, we see that Brian also holds some selfish qualities in him. This is illustrated during the language class with Fritz, when Sally suddenly enters craving for a drink of alcohol. Immediately Brian encourages her to leave, it is clear here that he is worried about his appearance to the rich and well bought up Natalia Laundaur. Brian doesn't question the reasons to why she needs a drink; he apparently doesn't see that having a drink in the middle of the afternoon is not exactly of the norm, even for someone like Sally. This is not the only occasion where we see Brian behave self-sufficiently. He later reveals to Sally that he too was "screwing" Maxamillion and was being unfaithful to her. It is easy to label Sally as selfish when her infidelity is revealed because after all, as a cabaret dancer it is very much expected of her. But Brian too is being egotistical, because he cheated on Sally, which shows that he obviously didn't think of her when he was giving into his sexual desires. ...read more.

This is illustrated when Fritz begs Natalia to marry him despite that fact that he is a so-called "Protestant" and she is a Jew. Natalia refuses him and this leads to Fritz revealing the truth about himself: "I am a Jew" he declares to Natalia. Here Fritz has given up his selfish ways and labelled himself as a Jew, which is a death sentence in Germany, all because of his love for Natalia. By the end of the film, we notice a considerable difference in the character of Fritz, who has changed from a selfish "gigolo" to an "honest man." In conclusion, by the end of the film we see that the characters' motives in their relationships have changed from selfishness to sincerity. Sally, Brian and Fritz all realise that honesty and love is the key to happiness in a relationship, rather that self-centredness. They understand that the important factor in a relationship is not to think of oneself, but to rather think of the other person instead. ...read more.