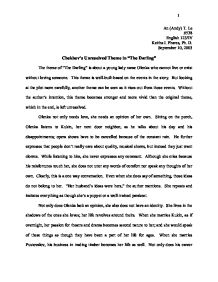 An (Andy) T. Le #538 English 123/IV Keitha I. Phares, Ph. D. September 10, 2003 Chekhov's Unresolved Theme in "The Darling" The theme of "The Darling" is about a young lady name Olenka who cannot live or exist without loving someone. This theme is well-built based on the events in the story. But looking at the plot more carefully, another theme can be seen as it rises out from those events. Without the author's intention, this theme becomes stronger and more vivid than the original theme, which in the end, is left unresolved. Olenka not only needs love, she needs an opinion of her own. Sitting on the porch, Olenka listens to Kukin, her next door neighbor, as he talks about his day and his disappointments; opera shows have to be cancelled because of the constant rain. He further expresses that people don't really care about quality, musical shows, but instead they just want clowns. ...read more.

As history repeats itself, so does Olenka when she gets involved with the veterinary surgeon. When surgeon's guests come over, she serves them tea and engages in long conversation about various diseases and plague as if she is a surgeon herself. Being embarrassed by her actions, he angrily disapproves her for talking about things that she doesn't know. The statement that expresses the epitome of her emptiness is, "...what am I to talk about?" Love gives her a temporary identity. As soon as her lovers disappear, her identity evaporates with them. Throughout the story, the plot is built around her need for an identity and an opinion more than her need for love. Yes, she needs love; constantly, in fact. But this need quickly subsides as soon as she becomes involved in a relationship. Regardless of whether her need for love is satisfied or not, her other need remains - hidden and subconscious; and around this need is where events unfold. ...read more.

The author does not explain or gives any hints as to why this maternal love gives her an identity. One is leave to guess: maybe it's the boy; maybe it's the love; maybe she's too old to love anyone else. One can only wonder. Throughout the story, her need for a maternal love is never mentioned or suggested. If love is her primary need to be satisfied, one would be left baffled and frustrated because, clearly, the conflict being resolved at the end is her need for an identity and opinion. In conclusion, while the author tries to show that Olenka needs love, he unintentionally shows that she needs more than that; she needs and identity and an opinion of her own. While a plot is built on her relationships, another is built underneath and gradually increasing - her lack of identity and opinion. In the end, her need for love resolves; but that theme has been diminished by the ever increasing need for her to have an identity and an opinion. That plot remains unresolved because that is not part of the author's intention since the beginning. 1 ...read more.