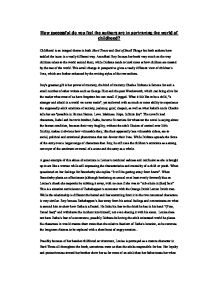 How successful do you feel the authors are in portraying the world of childhood? Childhood is an integral theme in both Hard Times and God of Small Things but both authors have tackled the issue in a vastly different way. Arundhati Roy focuses her book very much on the way children relate to the world around them, while Dickens tends to look more at how children are treated by the rest of the world. This small change in perspective gives a vastly different view of children's lives, which are further enhanced by the writing styles of the two authors. Roy's greatest gift is her power of memory, the kind of memory Charles Dickens is famous for and a small number of other writers such as George Eliot and the poet Wordsworth, which can bring alive for the reader what most of us have forgotten but can recall if jogged. What it felt like to be a child, "a stranger and afraid in a world we never made", yet endowed with as much or more ability to experience the supposedly adult emotions of anxiety, jealousy, grief, despair, as well as what Rahel's uncle Chacko tells her are "possible in Human Nature. Love. Madness. Hope. Infinite Joy". The novel's lead characters, Rahel and her twin brother, Estha, become fit carriers for whatever the novel is saying about the ...read more.

He knows precisely what his seniors are looking for ("Quadruped. Graminivorous. Forty teeth...") and by giving them the answers they look for he gains enough of their trust and respect to cover his lack of scientific intelligence and to gain information he wants from them. He becomes an expert at understanding Mrs Sparsit and soon begins to have control over her by merely placing ideas in her grasp and letting her take the credit for them "you did object to names being used, and they're always best avoided". To watch Bitzer converse with Mrs Sparsit is highly amusing as we are directly seeing Dickens ridiculing her through the boy: "He now and then slided into 'my lady', instead of 'ma'am', as an involuntary acknowledgement of Mrs Sparsit's dignity". Dickens uses Bitzer as a fine example that children (or youths, at this stage in the book) have every right to be as sharp and manipulative as the adults are. Louisa can also be incredibly acute at times, demonstrated as she conversed with Mr Harthouse, leaving Bounderby perplexed by the speed and insightful nature of their conversation. Harthouse's innocent phrase "because I have no choice of opinions" is quickly torn apart by an astute Louisa who jumps in: "Have you none of your own". The rapid fire exchange is broken only by Mr Bounderby mentioning the postponement of dinner. ...read more.

While this does little to weaken the criticism that Hard Times makes it must be taken into account that when Dickens wrote it, it probably didn't seem quite as absurd as it does to us today. Roy presents the case of modern children of a younger age than Hard Times' characters so they are in most ways less hardened to life's cruelties. Instead Roy presents them coping with the troubles that young children have to overcome, and more importantly she tries to consider the thoughts that Estha and Rahel would be having whilst in these situations. This is where her memory and understanding of children really seem to come into their own. She manages to provoke feelings in her readers from their background that enables them to form a strong bond with her young characters, on a peer level rather than that on her seniors as Dickens tends to do. It is hard to say one author does a better job at presenting childhood than the other because they both focus on different areas of the maturing mind, but I feel Roy has done a very thought-provoking and insightful study of childhood in a fast paced page-turning style, where Dickens has instead attempted, and succeeded in making a lighter, and perhaps more fun, family targeted story book that aims to entertain and occupy the reader, rather than forcing them to take a hard look children and their lives. Word Count: 2256 ?? ?? ?? ?? ...read more.