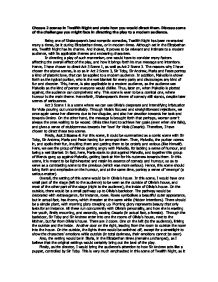 Choose 2 scenes in Twelfth Night and state how you would direct them. Discuss some of the challenges you might face in directing the play to a modern audience. Being one of Shakespeare's best romantic comedies, Twelfth Night has been re-enacted many a times, be it during Elizabethan times, or in modern times. Although set in the Elizabethan era, Twelfth Night has its charms. And indeed, it proves to be relevant and intimate to a modern audience, with its applicable themes and endearing characters. In directing a play of such mannerism, one would have to consider many factors affecting the overall effect of the play, and how it brings forth its true message and intentions. Hence, I have chosen to direct Act 3 Scene 1, as well as Act 2 Scene 3. The reasons why I have chosen the above scenes, is so as in Act 2 Scene 3, Sir Toby, Sir Andrew, Maria and Feste portray a kind of platonic love, that can be applied to a modern audience. In addition, Malvolio is shown forth as the typical puritan, who is the wet blanket for every party and discourages any kind of fun and disorder. This, hence, is also applicable to a modern audience, as the audience see Malvolio as the kind of person everyone would dislike. Thus, later on, when Malvolio is plotted against, the audience can comprehend why. This scene is seen to be a comical one, where humour is the main theme. Henceforth, Shakespeare's theme of comedy still stands, despite later scenes of seriousness. Act 3 Scene 1 is a scene where we can see Olivia's desperate and intensifying infatuation for Viola pouring out uncontrollably. Through Viola's focused and straightforward rejections, we once again sense her dilemma due to her disguise, and also her devotion towards her task and towards Orsino. On the other hand, the message is brought forth that perhaps, woman aren't always the ones waiting to be wooed. ...read more.

Malvolio, in this case should bend a little (in a little fear), but act as if he is not overpowered. At this, Malvolio realises their intention, and turns his insults towards Maria (who seems to be easier to attack). Perhaps, Sir Toby and Feste could point accusingly at Malvolio, and shake their heads in disgust, behind his back, when Malvolio scolds Maria (bullying one of a lower rank), to show that Malvolio is being a bully to attack Maria, a female, and Olivia's maid. Finally, Malvolio leaves. At the point of his angered departure, Malvolio slams the door shut, showing his uncivilised side, and causing the audience to feel more anguish towards his superficiality. He departs through the right door, and exits the stage. As he leaves, the light slowly brightens, and the tone of the scene soothes again, into a comic and light-hearted one. Maria calls after Malvolio sarcastically, "Go shake you ears", and Sir Andrew comically wants "to challenge him the field". In these lines, we see that Sir Andrew is illogical and comic in his speech, and hence, the tension caused by Malvolio is released, and the audience is able to start laughing heartily at Sir Andrew once again. Thereafter, Sir Toby also thinks of resorting to violence. Maria quickly tells them that "If I do not gull him into a nayword, and make him a common recreation, do not think I have wit enough to lie straight in my bed. I know I can do it." Maria says this clenching her fist and with a confident look. This assures the rest that she would indeed be able to seek revenge against Malvolio. Sir Toby excitedly utters, "Possess us, possess us..." Sir Toby should flutter his hands in anticipation and stare at Maria in admiration. Here, we see a growing bond between them, and the audience experience it too, and smile at this building up of friendship. ...read more.

Next, a challenge would be bringing out the comedy of the play, and at the same time, show the dark moments (underlying tone) without spoiling the overall mood. This is however made simpler with Shakespeare's good use of the 'see-saw' method, balancing off the dark moments with comical and humorous ones. This lightens off the mood and allows the play to fit its name of "What you will" which gives the impression of a carefree and light-hearted tone. Shakespeare also ends off with Feste singing "But that's all one, our play is done/And we'll strive to please you every day." This ends off the play in a light tone, and informs the audience that after all, this is a play, and the purpose is to entertain, and pushes away the doubts and feelings of darkness, and brings forth the carefree tone of the play. Overall, this challenge still stands in the sense of showing Shakespeare's 'see-saw' method in its best light. Another challenge that I think I would face in directing this play would be making the costumes fit the Elizabethan times, yet attracting the modern audience and adding a personal touch to display the play in a way impressing to a modern audience, whom I believe like to watch plays which attract them at first glance. Hence, the clothing could be modern cum Elizabethan, creating an interesting mix. Yet another challenge would be keeping the audience engaged and have continued interest in the show, so as to bring the show to them fully and meaningfully. This is important as if the audience cannot stay focused, the overall effect may be affected. Hence, perhaps the actors could engage the audience with eye contact and stand in such a way as to not have their backs face the audience (unless completely necessary). All in all, directing the play of Twelfth Night to a modern audience proves to be a challenging task, but possible with perseverance in keeping the overall comedy-romantic genre of the play. ...read more.