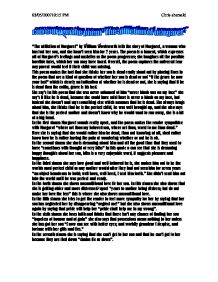 "The affliction of Margaret" by William Wordsworth tells the story of Margaret, a woman who has lost her son, and she hasn't seen him for 7 years. The poem is a lament, which expresses all of Margaret's feelings and anxieties as the poem progresses; she imagines all the possible horrible fates, which her son may have faced. Overall, the poem captures the universal fear any parent would feel if their child was missing. This poem makes the fact that she thinks her son is dead really stand out by placing lines in the poem that are a kind of question of whether her son is dead or not "if the grave be now your bed" which is clearly an indication of whether he is dead or not, she is saying that if he is dead then the coffin, grave is his bed. ...read more.

In the second stanza she starts dreaming about him and all the good time that they used to have "sometimes with thought of very bliss" in this quote u can see that she is dreaming happy thoughts about her son, bliss is a very enjoyable word, it suggests pleasure and happiness. In the third stanza she says how good and well behaved he is, she makes him out to be the worlds most perfect child as any mother would after they had not seen him for seven years "an object beauteous to hold; well born, well bred, I sent him forth." She didn't send him out into the world until he was perfect and ready. In the forth stanza she shows unconditional love fir her son. In this stanza she also shows that she is getting older and more distressed/upset "years to mother bring distress; but do not make her love the less" this is where she also shows unconditional love. ...read more.

In the ninth stanza she thinks because she doesn't believe in the spirit world she may never see him again "that there was ever intercourse betwixt the living and the dead" she also thinks that if her son isn't dead people are hiding her from him and that they wont tell her where her son. In the tenth stanza she is going pretty much insane, everything worries her "I dread the rustling of the grass; the very shadow of the clouds have the power to shake me as they pass" she sees the whole world as unkind because she has lost her son. In the final stanza she wants news of her son, and she wants someone to support her while she's all alone in the world "I have no other earthly friend" which clearly shows that she is alone. 02/04/20037:49 PM Chris shemeld ...read more.