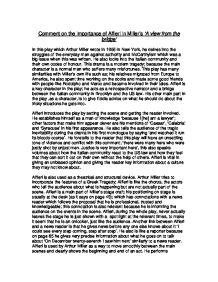 Comment on the importance of Alfieri in Miller's 'A view from the bridge' In this play which Arthur Miller wrote in 1955 in New York, he delves into the struggles of the everyday man against authority and McCarthyism which was a big issue when this was written. He also looks into the Italian community and their own codes of honour. This drama is a modern tragedy; because the main character is a normal man who suffers many misfortunes. This play has many similarities with Miller's own life such as; his relatives migrated from Europe to America, he also spent time working on the docks and made some good friends with people like Rodolpho and Marco and became involved in their tales. Alfieri is a key character in the play; he acts as a retrospective narrator and a bridge between the Italian community in Brooklyn and the US law. His other main part in the play ,as a character, is to give Eddie advice on what he should do about the tricky situations he gets into. Alfieri introduces the play by setting the scene and getting the reader involved. He establishes himself as a man of knowledge 'because I [he] am a lawyer'; other factors that make him appear clever are his mentions of 'Caesar', 'Calabria' and 'Syracuse' in his first appearance. ...read more.

For instance, before the beginning of the next scene on page 65, Eddie is having an argument with Rodolpho for getting to close to Catherine. He is threatening to tell the US government about his 'submarine' status (because he came into the country below the law). Alfieri builds the tension between them by describing Eddie's eyes as 'tunnels' (this is a repeated motif as it is also used at the very beginning of the play) and 'how dark the room became'. In this section Alfieri speaks with the voice of the American law; he tells Eddie that there is nothing he can legally do a bout it with these words 'morally and legally you have no rights, you cannot stop it; she is a free agent'. He also advises Eddie not to use his Italian codes, because he knows it will get him into trouble with the American law; Alfieri says 'you can't stop it' to try and warn Eddie. He also tries to warn Eddie by using the image of the river which will' drown you [Eddie] if you buck now', this image relates to the title which heightens its importance; also as we know the two of them are in Alfieri's office which looks over the Brooklyn bridge and the river that rushes beneath it, making it even clearer to Eddie. ...read more.

This is why Marco marks a vendetta against Eddie, after he finds out that he had told immigration, he tells Alfieri of this and relates that 'in my country he would be dead by now'; which shows just how significant this betrayal is and how important it is to gain justice to Italians. Miller through Alfieri raises two very important issues in the play and in New York at the time; the major difference between Italian law and the conventional US law and the central quote 'better to settle for half' in the electrify last scene. However, as you think a lawyer would, Alfieri does not come up with a solution, but he does make the audience think about what they think themselves and he wants them to realise that there is not a clear cut answer. We can often compare Alfieri and Miller because they both were trying to fight for higher status in American society. They felt as if they were perceived as less of an American because of their immigrant background. Alfieri's two functions in this play as a retrospective narrator and as a character make him an integral part of the play. This is undeniable evidence that Alfieri is a very important character in this modern tragedy written by Arthur Miller ...read more.