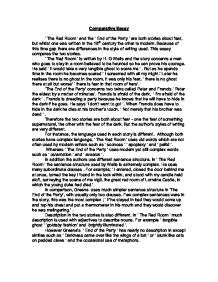 Comparative Essay ' The Red Room ' and the ' End of the Party ' are both stories about fear, but whilst one was written in the 18th century the other is modern. Because of this time gap there are differences in the style of writing used. This essay compares the two stories. ' The Red Room ' is written by H. G Wells and the story concerns a man who goes to stay in a room believed to be haunted so he can prove his courage. He said ' It would take a very tangible ghost to scare me ' . But as he spends time in the room he becomes scared ' I screamed with all my might.' Later he realises there is no ghost in the room, it was only his fear, ' there is no ghost there at all but worse' ' there is fear in that room of hers'. ...read more.

Whereas ' The End of the Party ' uses modern yet still complex words such as ' ostentation ' and ' evasion '. In addition the authors use different sentence structure. In ' The Red Room ' the sentence structure used by Wells is extremely complex. He uses many subordinate clauses . For example; ' I entered, closed the door behind me at once, turned the key I found in the lock within, and stood with my candle held aloft, surveying the scene of me vigil, the great red room of Lorraine Castle, in which the young duke had died.' In comparison, Greene uses much simpler sentence structure in 'The End of the Party', with usually only two clauses. Few complex sentences were in the story, this was the most complex ; ' If he stayed in bed they would come up and tap his chest and put a thermometer in his mouth and they would discover he was malingering.' ...read more.

He keeps them mysterious like the rest of the story. The whole story is in first person but the furthest description of characters is ' the man with the withered arm ' and ' the man with the shade '. 'The End of the Party' however has much character description; ' The two lay facing each other, the same green eyes, the same nose tilting at the tip, the same premature modelling of the chin'. Therefore whilst Greene chose to describe the characters in great detail, Wells wrote keeping the characters mysterious. I found the story 'The Red Room' more effective because I liked the way Wells kept the whole story, including the characters, mysterious. I found ' The End of the Party ' was more predictable as you knew what was going on and what the characters were like from very early on in the story. Because ' The Red Room ' didn't make these things obvious, it made me want to read on further , so I could find out. ...read more.