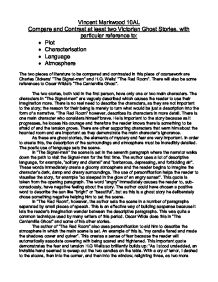 Vincent Markwood 10AL Compare and Contrast at least two Victorian Ghost Stories, with particular reference to: * Plot * Characterisation * Language * Atmosphere The two pieces of literature to be compared and contrasted in this piece of coursework are Charles Dickens' "The Signal-man" and H.G. Wells' "The Red Room". There will also be some references to Oscar Wilde's "The Canterville Ghost". The two stories, both told in the first person, have only one or two main characters. The characters in "The Signal-man" are vaguely described which causes the reader to use their imagination more. There is no real need to describe the characters, as they are not important to the story; the reason for their being is merely to turn what would be just a description into the form of a narrative. "The Red Room" however, describes its characters in more detail. There is one main character who considers himself brave. He is important to the story because as it progresses, he looses his courage and therefore the reader knows there is something to be afraid of and the tension grows. ...read more.

Oscar Wilde does this in "The Canterville Ghost" and some of his other stories. The author of "The Red Room" also uses personification to aid him to describe the atmosphere in which the main scene is set. An example of this is, "my candle flared and made the shadows cower and quiver". This creates a sense of fear because the reader will automatically associate cowering with being scared and frightened. This important quote demonstrates the fear and tension H.G Wells so brilliantly builds up: "As I stood undecided, an invisible hand seemed to sweep out the two candles on the table. With a cry of terror, I dashed to the alcove, then into the corner, and then into the window, relighting three, as two more vanished by the fireplace". There are lots of pauses within the two sentences and this makes it punchy and rhythmic helping create the building suspense. The word "terror" is a word not to be used lightly, by definition, it means the ultimate description of the horror and the dread the character is feeling. ...read more.

Both "The Signal-man" and "The Red Room" stories are similar in the sense that they contain most of the traditional features of a Victorian period ghost story including fear, mystery, tension, death and, obviously, a ghost or spirit of some kind. A great difference between "The Red Room" and "The Signal-man" is that "The Signalman" has an actual ghost that we can visualise, but "The Red Room" does not; the narrator is simply scared by the room so much that he begins to believe that there is a ghost with him or that the room is haunted. Personally, I find the latter more tense for that reason; your imagination has to work harder to imagine something that is not actually there. We have all been tucked up in bed at night and been scared by the dark and strange noises coming from downstairs. You as the reader can therefore relate with "The Red Room" and take it further than just a story. ...read more.