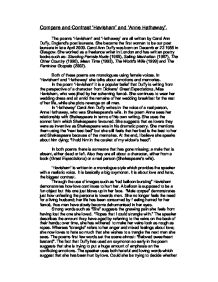 Compare and Contrast 'Havisham' and 'Anne Hathaway'. The poems 'Havisham' and 'Hathaway' are all written by Carol Ann Duffy, England's poet laureate. She became the first woman to be our poet laureate in late April 2009. Carol Ann Duffy was born on December 23 1955 in Glasgow. She worked as a freelance writer in London and has written poetry books such as: Standing Female Nude (1985), Selling Manhattan (1987), The Other Country (1990), Mean Time (1993), The World's Wife (1999) and The Feminine Gospels (2002). Both of these poems are monologues using female voices. In 'Havisham' and 'Hathaway' she talks about emotions and memories. In the poem 'Havisham' it is a popular belief that Duffy is writing from the perspective of a character from Dickens' Great Expectations, Miss Havisham, who was jilted by her scheming fianc�. She continues to wear her wedding dress and sit amid the remains of her wedding breakfast for the rest of her life, while she plots revenge on all men. In 'Hathaway' Carol Ann Duffy writes in the voice of a real person, Anne Hathaway, who was Shakespeare's wife. In the poem Anne sees her relationship with Shakespeare in terms of his own writing. She uses the sonnet form which Shakespeare favoured. She suggests that as lovers they were as inventive as Shakespeare was in his dramatic poetry. ...read more.

This metaphor can be used to explain the speakers' attitudes towards men. Dark suggests that she no longer feels anything for men while the green suggests envy; the speaker is jealous of all the love that surrounds her. It reminds her of what she almost had, of what she will never experience. Duffy uses enjambement throughout the stanzas to emphasise Havisham's mental insecurity. It demonstrates how confused she is by her conflicting emotions and cannot decide whether she hates men or not. The final part of the third stanza merges into the fourth, demonstrating the distress that Havisham feels. "Spinster. I stink and remember. Whole days in bed cawing Noooo at the wall; the dress yellowing, trembling if I open the wardrobe; the slewed mirror, full-length," Despite describing the obvious; her wedding dress becoming yellow with age, the speaker is also explaining how her hate of men is everlasting. "Who did this to me?" suggests her insecurity. Who is really to blame for who she has become? Duffy uses enjambement on "to me" to further emphasise this point. Despite looking orderly, the poem is set into neat stanzas; enjambement is used constantly throughout the poem to show the speaker cannot control her emotions properly. Her feelings of love and hate are becoming confused while her constant babbling expresses her emotional insecurity. ...read more.

More metaphors follow in lines three and four as Anne Hathaway recalls their lovemaking; she expresses the notion that Shakespeare would 'dive for pearls', and she describes the sweet words he said to her as 'shooting stars' that landed on her lips when he kissed her. In lines eleven and twelve a contrast is created to the early magic of the poem in the description of how the guests, in the best bed, 'dozed on, / dribbling their prose'; no poetic lovemaking for them! But line twelve then switches to Anne's alliterative description of Shakespeare as 'My living laughing love'. She tells us in line thirteen how she treasures her memories of him with the metaphor 'I hold him in .the casket of my widow's head'. The final line compares this act to the way in which Shakespeare held Anne so lovingly in that second-best bed. The last two lines are a rhyming couplet, just as the last two lines of a Shakespearian sonnet would be, ending the poem with a sense of unity. The poet, in my opinion has had a love who she felt this strongly for. 'Havisham' is a poem full of rich imagery, the tale of a woman who remembers her husband in a wonderful, loving way with no hint of sorrow. It is beautiful to read and to dwell on the magical pictures that are painted within it. ...read more.