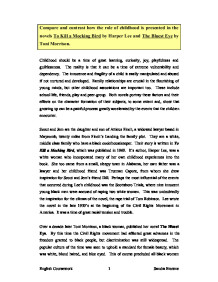 Compare and contrast how the role of childhood is presented in the novels To Kill a Mocking Bird by Harper Lee and The Bluest Eye by Toni Morrison.

Compare and contrast how the role of childhood is presented in the novels To Kill a Mocking Bird by Harper Lee and The Bluest Eye by Toni Morrison. Childhood should be a time of great learning, curiosity, joy, playfulness and guiltlessness. The reality is that it can be a time of extreme vulnerability and dependency. The innocence and fragility of a child is easily manipulated and abused if not nurtured and developed. Family relationships are crucial in the flourishing of young minds, but other childhood associations are important too. These include school life, friends, play and peer-group. Both novels portray these factors and their effects on the character formation of their subjects, to some extent and, show that growing up can be a painful process greatly accelerated by the events that the children encounter. Scout and Jem are the daughter and son of Atticus Finch, a widowed lawyer based in Maycomb, twenty miles from Finch's Landing the family plot. They are a white, middle class family who have a black cook/housekeeper. Their story is written in To Kill a Mocking Bird, which was published in 1960. It's author, Harper Lee, was a white woman who incorporated many of her own childhood experiences into the book. She too came from a small, sleepy town in Alabama, her own father was a lawyer and her childhood friend was Trueman Capote, from whom she drew inspiration for Scout and Jem's friend Dill. Perhaps the most influential of the events that occurred during Lee's childhood was the Scottsboro Trials, where nine innocent young black men were accused of raping two white women. This was undoubtedly the inspiration for the climax of the novel, the rape trial of Tom Robinson. Lee wrote the novel in the late 1950's at the beginning of the Civil Rights Movement in America. It was a time of great racial tension and trouble. ...read more.

By and by I will not get sick; I will refuse to. But for now I am crying." (The Bluest Eye, P7) In retrospect Claudia as narrator realises that whilst the experience may have been painful at the time, the care her mother gave her served to show her that she was loved and her abiding memory of that time was a positive one. "So when I think of autumn, I think of somebody with hands who does not want me to die." (The Bluest Eye, P.7) Interestingly, when she is reminiscing she refers to her mother as 'somebody', with perhaps the same kind of detached affection she had been raised with. Although their relationship with their father was distant, he reacted immediately on hearing that the lodger Mr Henry had abused Frieda. He beats her abuser up and actually shoots at him. Distressing and confusing as this experience was, (she heard someone say she was ruined but did not know what this meant, it showed Frieda that she was protected and cared for. Scout and Jem have a warmer more interactive relationship with their father. Scout tells us: "Jem and I found our father satisfactory: he played with us, read to us, and treated us with courteous detachment." (To Kill a Mocking Bird, P.6) After reading the novel it is hard to agree that Atticus treated the children with '...courteous detachment'. Unlike the MacTeer parents, he talks to his children giving them a forum to air their views and build close relationships and also allaying their fears and worries when necessary. Scout and Jem would run to meet their father every night as he walked home from work and he would lift his daughter on to his shoulders and carry her home in this way. Would a 'detached' father allow his daughter to sit on his lap every night while he reads the paper as Atticus did? ...read more.

These all, in their own way, serve to develop the thinking and morality of the children. The absence of this role in The Bluest Eye seems to emphasise the vulnerability and powerlessness in its characters. The novels The Bluest Eye and To Kill a Mocking Bird could be described as social novels as they deal with issues, which were exceedingly relevant to what was happening in society as a whole, and both authors wanted to comment on that. They also dealt with the more vulnerable in society, the children. Toni Morrison tells us in the Afterword to the book that her aim was to address the issue of racial self-loathing and she chose the weakest member of society, a little black girl, to portray this. She is successful at achieving her aim, writing a gritty and disturbing story, which is depressingly sad to read and very tragic, but extremely powerful because of that. She doesn't present a balanced view of childhood, i.e. her lack of 'play' is almost total in the book, but I believe she does this deliberately in order to get her stark message across. In contrast, Harper Lee's novel tells a different story, from a white perspective and easier circumstances. She portrays childhood in a more balanced, and easy to read way. The character of the narrator Scout is infused with wit and humour and she paints pictures of lazy summer days at play, while still managing to deal with the rape trial and its aftermath. Her characters develop throughout the novel by a series of moralistic encounters with neighbours and family, until by the end of the novel Scout realises that they have learnt so much and remarks: "As I made my way home, I though Jem and I would get grown but there wasn't much else left for us to learn, except possibly algebra." (To Kill a Mocking Bird, P308) Lee certainly gets her point across but does so in a gentler, less harrowing way. ...read more.