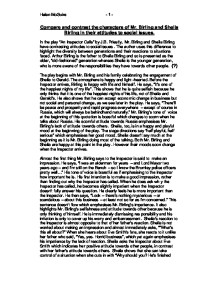 Compare and contrast the characters of Mr. Birling and Sheila Birling in their attitudes to social issues.

Compare and contrast the characters of Mr. Birling and Sheila Birling in their attitudes to social issues. In the play "An Inspector Calls" by J.B. Priestly, Mr. Birling and Sheila Birling have contrasting attitudes to social issues. The author uses this difference to highlight the diversity between generations and their reactions to situations faced. Arthur Birling is the father to Sheila Birling and so is presented as the older, "old-fashioned" generation whereas Shelia is the younger generation, who is more aware of the responsibilities they have towards other people. (?) The play begins with Mr. Birling and his family celebrating the engagement of Sheila to Gerald. The atmosphere is happy and light-hearted. Before the Inspector arrives, Birling is happy with life and himself. He says, "It's one of the happiest nights of my life". This shows that he is quite selfish because he only thinks that it is one of the happiest nights of his life, not of Sheila and Gerald's. He also shows that he can accept economic change in business but not social and personal change, as we see later in the play. He says, "There'll be peace and prosperity and rapid progress everywhere - except of course in Russia, which will always be behindhand naturally." ...read more.

Sheila asks the Inspector about Eva Smith which indicates her positive attitude towards other people, in contrast with her father's attitude towards others. Sheila shows that she can take control of a situation when she cuts in with "Why should you? He's finished with you. He says it's one of us now." The use of the short sentences shows that Sheila is not afraid to speak up for herself. Sheila shows that she can relate to Eva Smith and understands the situation she faced. She shows her attitude towards society when she says, "But these girls aren't cheap labour - they're people." Sheila represents the new generation and society who were more understanding when it came to social issues and working conditions; issues that Mr. Birling doesn't understand. The reader can see that Sheila gets stronger throughout the play and this can be seen when she gives Gerald back his ring. At the beginning of the play, she said little and was very playful but as the play progressed, the readers gets the impression that she took control and gained strength to speak up against her parents. By giving the ring back to Gerald, Sheila is refusing what society expects of her and by doing this she is representing the new generation and society. ...read more.

They understood their responsibility to other people unlike Mr and Mrs. Birling. Mr. Birling and Shelia both react differently throughout the play and through this, you can see their attitudes to social issues. Mr. Birling denies that he knows Eva Smith and will not accept responsibility for her death even though it was him who started it. When the Inspector leaves and they find out he isn't an Inspector, Mr. Birling pretends everything is back to normal and nothings wrong whereas Sheila is still affected by what has happened even though it may not be true. She doesn't understand how her father can go back to normal. Mr. Birling emphasises the differences between the older and younger generations and refuses to accept social change. Sheila gets stronger throughout the play and she symbolises the new generation and society. Sheila accepts change and knows what they did was wrong. She understands that if it had happened, there would have been consequences. The message that J.B Priestly is putting across is that people have a responsibility towards others. The Inspector says, "We don't live alone. We are members of one body. We are responsible for each other...if men will not learn that lesson, then they will be taught it in fire and blood and anguish." The party at the beginning represents society but underneath the happiness, society is rotten. ?? ?? ?? ?? Helen McGuire - 1 - ...read more.