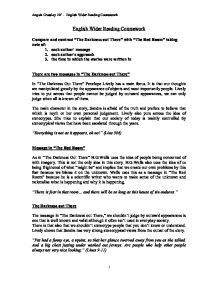 Compare and contrast &quot;The Darkness out There&quot; with &quot;The Red Room&quot; taking note of, each author' message, each author's approach, and the time in which the stories were written.

English Wider Reading Coursework Compare and contrast "The Darkness out There" with "The Red Room" taking note of: 1. each author' message 2. each author's approach 3. the time in which the stories were written in There are two messages in "The Darkness out There" In "The Darkness Out There" Penelope Lively has a main focus. It is that our thoughts are manipulated greatly by the appearance of objects and most importantly people. Lively tries to put across that people cannot be judged by outward appearances, we can only judge when all is known of them. The main character in the story, Sandra is afraid of the truth and prefers to believe that which is myth or her own personal judgement. Lively also puts across the idea of stereotypes. She tries to explain that our society of today is mainly controlled by stereotypical views that have been escalated through the years. "Everything is not as it appears, oh no!" (Line 384) Message in "The Red Room" As in "The Darkness Out There" H.G.Wells uses the idea of people being concerned of with imagery. This is not the only idea in this story. H.G.Wells also uses the idea of us being frightened of what "might be" and implies that we create our own problems by this fear because we blame it on the unknown. Wells uses this as a message in "The Red Room" because he is a scientific writer who wants to make sense of the unknown and rationalise what is happening and why it is happening. ...read more.

Sandra realised that under his "acne" and "lardy midriff" there was a person with morals but also a kind heart. Sandra has also grown up as she realises this of Kerry. Lively uses rhythm to show Sandra's thought processes. There are a lot of long rambling sentences which switch about, almost confusing the reader because of the strange thoughts in her head. Also the tense is changed throughout the story making the story quite badly structured. Also it means that sometimes Sandra is speaking and others it means a narrator is speaking. "The Red Room" There is alliteration of the title - "Red Room," this makes it stand out to the reader and makes you think about its meaning. Red is linked with blood and danger therefore hinting that the room is dangerous or death has occurred there. H.G.Wells uses the description of people to create a vision in the reader's mind without too much description. This is similar to "The Darkness out There" although there isn't as much vivid description. "The man with the withered arm" (Pg. 205) "A second old man entered, more bent, more wrinkled, more aged than the first. He supported himself by a single crutch, his eyes were covered by a shade, and his lower lip, half averted, hung pale and pink from his decaying yellow teeth" (Pg. 205) This description builds up a picture in the readers mind that this is a house of horror and that the people living in it are 'freaks,' although the main character does not seem phased by these people the reader can sense that they are not normal people. ...read more.

Differences of the Two Stories * "The Red Room" is very mellow dramatic. It is written how you would expect a ghost story to be written. It is also set in a place where a typical ghost story would be set in although this does not make the story less interesting. "The Darkness out There" is set mainly outside on a sunny day, completely the opposite of what you would expect for this type of story. * In "The Darkness Out There" there is fear at the outset of the story, which is the resolved by the end, as the message of the story is used and portrayed by doing this. In "The Red Room" it is different. The fear of the room by the three inhabitants is not resolved but they realise that as "long as this house of sin endures" (Sic) it will be there. Therefore they realise that as long as they are there then the fear will be there in that room. * In "The Red Room" there are no names mentioned throughout the story. We only have reference to the different characters by their strange description e.g. "The man with the withered arm." This stops the reader judging the character by their name but by the description given we certainly can. In "The Darkness Out There" names are given as well as a detailed description. This gives the reader two lots of information from which they are able to judge the characters by. The Time in which The Stories Were Written "The Darkness Out There" was written after the 2nd World War. ...read more.