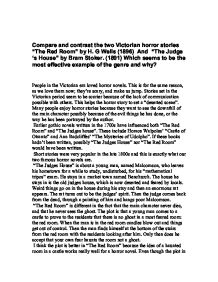 Compare and contrast the two Victorian horror stories "The Red Room" by H. G Wells (1896) And "The Judge 's House" by Bram Stoker. (1891) Which seems to be the most effective example of the genre and why? People in the Victorian era loved horror novels. This is for the same reason, as we love them now; they're scary, and make us jump. Stories set in the Victorian period seem to be scarier because of the lack of communication possible with others. This helps the horror story to set a "deserted scene". Many people enjoy horror stories because they want to see the downfall of the main character possibly because of the evil things he has done, or the way he has been portrayed by the author. Earlier gothic novels written in the 1700s have influenced both "The Red Room" and "The Judges house". These include Horace Walpoles' "Castle of Otranto" and Ann Radcliffes' "The Mysteries of Udolpho". If these books hadn't been written, possibly "The Judges House" nor "The Red Room" would have been written. Short stories were very popular in the late 1800s and this is exactly what our two famous horror novels are. "The Judges House" is about a young man, named Malcomson, who leaves his hometown for a while to study, undisturbed, for his "mathematical tripos" exam. He stays in a market town named Benchurch. The house he stays in is the old judges house, which is now deserted and feared by locals. Weird things go on in the house during his stay and then an enormous rat appears. The rat turns out to be the judges' spirit. Then the judge comes back from the dead, through a painting of him and hangs poor Malcomson. ...read more.

She even brings the doctor out one day to try and deter Malcomson from staying but it doesn't work. Mrs. Dempster is completely different. She is the cleaner for Malcomson and doesn't believe in the supernatural. What she does hate are the rats though. She states, " rats are bogies and bogies are rats". All this opposition between the two women creates tension. This is because the reader doesn't know who to believe even though Malcomson clearly believes Mrs. Dempster. In "The Red Room" we never learn the name of the main character. He is very much the same as Malcomson. He is arrogant and only goes to the red room to prove others wrong. He doesn't believe in the supernatural. For example, in the red room he convinces himself that it is a draft, which is causing the candles to blow out. The main character is very offensive which leads to us not liking him and looking forward to his downfall. The elderly inhabitants of the castle are referred to as "grotesque", having "monstrous shadows" and "withered arms". By describing people this way it conjures up thoughts of monsters and the undead, which goes very well with the horror genre. There were many young Victorian men who started thinking that they were far superior to older people. Putting these elderly men and women in the same room as a young, full of himself man creates an interesting juxtaposition. The main character is finally proved wrong though, when he says, "It would take a very tangible ghost to frighten me", but in the end it is an invisible ghost that scares him. When he is in the red room the main character checks for gaps in the wainscot and for secret entrances. ...read more.

"The Judges House" is written in third person narrative, which gives the author the freedom to decide whether the main character lives or dies. The author relates to the main character, Malcomson, as "he". "Malcomson made up his mind", is an example of this narrative. After a speech "said he" often follows, this shows an objective narrative. In "The Red Room" it would read "I said" because it is written in the first person narrative. It is subjective. Third person narrative gives a good ending because, until the end (unless already stated) doesn't tell the reader whether the main character lives or dies. Unlike "The Judge's House", "The Red Room" is written in the first person narrative, which immediately tells you that the main character survives. In this case the story needs to be exciting through out, in order not to bore the reader with a predicted outcome. I'm sure that the best narrative for the horror genre is the third person narrative, which is used in "The Judge's House". This is because it gives an exciting ending and an unpredicted outcome. Overall, I think that "The Red Room" Is the most effective example of the horror genre. This is because people can get lost in the story. It is a lot more magical than "The Judge's House" which is more or less set in real life. The story really excelled in the atmosphere of the red room itself because of the wonderful descriptions of the furniture and vastness of the room. The Red Room" is definitely more gothic styled than "The Judge's House" and this is what I think a Victorian novel should be like. By Louis Rummer- Downing 10L2 , 10JF ...read more.