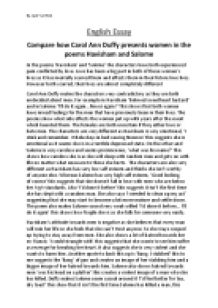 ﻿By Jack Yull 9A1 English Essay Compare how Carol Ann Duffy presents women in the poems Havisham and Salome In the poems ?Havisham? and ?Salome? the characters have both experienced pain conflicted by love. Love has been a big part in both of these women?s lives as it has mentally scarred them and affects them in their future love lives. However both scarred, their lives are almost completely different Carol Ann Duffy makes the characters very contradictory as they are both undecided about men. For example in Havisham ?Beloved sweetheart bastard? and in Salome ?I?ll do it again...Never again!? This shows that both women have mixed feelings for the men that have previously been in their lives. The poems show what side effects the women put up with years after the event which haunted them. The females are both uncertain if they either love or hate men. The characters are very different as Havisham is very emotional, ?I stink and remember. Whole days in bed cawing Nooooo? this suggests she is emotional as it seems she is in a terrible depressed state. On the other and Salome is very careless and seems promiscuous, ?what was his name?? this shows how careless she is as she will sleep with random men and gets on with life no matter what unaware to those she hurts. ...read more.

She is also seems to be envious of the woman her ex-fiancé chose over her ‘I’ve dark green pebbles for eyes’, green is associated with envy. It also suggests she has become cold hearted as you imagine a pebble being cold and firm. Salome also find it hard to move on as she believes if she trusts someone they would take advantage of it so she kills them before she is able to fall in love. However she sleeps with random men because she believes as she thinks they find her attractive and she can almost take control of men. Havisham has no emotion towards men as ‘red balloon bursting in my face’ suggests that love is never permanent as the more you put into love it will soon become weaker and weaker until it bursts. Also ‘red’ is associated with passion and love. Havisham and Salome contrast on levels of self esteem. For example Havisham says, ‘spinster. I stink’ this suggests she has a very low self esteem and unconfident on the person she is. Whereas Salome believes she is of a class higher above other people ‘Good looking, of course’ this suggests she doesn’t love someone unless they are good looking. Salome is also undecided of her opinion for example ‘I’ll do it again...Never again!’ this also suggests she is a pushover under the influence of alcohol she is weak willed as she can’t control her wrong actions and can’t resist temptations. ...read more.

Duffy also creates images of violence ?sticky red sheets?, indicating the blood of her murder victim. It is put casually into the poem and sounds as if Salome isn?t bothered as she finds it just as a inconvenience. ?Was his head on a platter? suggests she has been served it from somebody else. This proves that men are served to her and she is taking no effort to be served. Duffy also includes rhyme which creates a flow and rhythm to the poem, ?blighter...biter?. To conclude the two poems are very much the same, side effects of love. I preferred the poem Salome as she is more adventurous than Havisham and there was a hint of action in Salome. I also preferred Salome as she is rebellious however I dislike the fact she can?t control her actions. Havisham is also a different character as she is very strong willed, she doesn?t want to fall in love again so she doesn?t look to impress men. However she comes across as cowardly as she is scared she will be hurt again. I also prefer Salome as a character as she has self confidence and the poem contains some thrill whereas Havisham was dull and boring. Overall I enjoyed Salome because it was upbeat and I liked how Duffy put words as they had different meanings. ...read more.