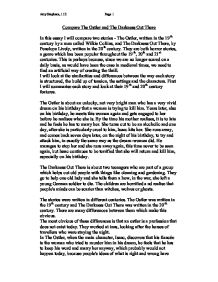 Compare The Ostler and The Darkness Out There

Compare The Ostler and The Darkness Out There In this essay I will compare two stories - The Ostler, written in the 19th century by a man called Wilkie Coliins, and The Darkness Out There, by Penelope Lively, written in the 20th century. They are both horror stories, a genre which has been popular throughout the 19th, 20th and 21st centuries. This is perhaps because, since we are no longer scared on a daily basis, as would have been the case in medieval times, we need to find an artificial way of creating the thrill. I will look at the similarities and differences between the way each story is structured, the build up of tension, the settings and the characters. First I will summarise each story and look at their 19th and 20th century features. The Ostler is about an unlucky, not very bright man who has a very vivid dream on his birthday that a woman is trying to kill him. Years later, also on his birthday, he meets this woman again and gets engaged to her before he realises who she is. By the time his mother realises, it is to late and he feels he has to marry her. She turns out to be an alcoholic and one day, after she is particularly cruel to him, Isaac hits her. She runs away, and comes back seven days later, on the night of his birthday, to try and attack him, in exactly the same way as the dream-woman did. He manages to stop her and she runs away again, this time never to be seen again, but Isaac continues to be terrified that she will return and kill him, especially on his birthday. The Darkness Out There is about two teenagers who are part of a group which helps out old people with things like cleaning and gardening. They go to help one old lady and she tells them a how, in the war, she left a young German soldier to die. ...read more.

When Rebecca suggests lying to Isaac's mother about who she is, the tension is built up again as we can see she is not going to be a "good" character. When she meets Isaac's mother for the first time, their reactions to each other make it a point of high tension. Our suspicions about Rebecca are confirmed, and there is another display of her unkind nature when she angrily storms out of the house, saying that Mrs Scatchard is mad. This is the point at which she starts making Isaac's life miserable, forcing him to choose between his mother and his wife. The way in which she is described from now on - "something [Rebecca] darkened the parlour window...a sudden chill ran through him.", "that fatal face" - helps to build up the tension as well as adding to the sense of Rebecca having supernatural powers. The gradual revealing of Rebecca's character, Isaac's mother's death and the approach of his birthday all help to build up the tension before the final attack. In The Darkness Out There tension is built up even before the story starts by the title, which hints that the story will not be pleasant reading. Unlike The Ostler, this story starts at a point of low tension. The pace of the first few paragraphs is a lot slower, and the sentences are longer. Tension is slowly being built up in these paragraphs, by the description of Packer's End and the small, unsettling hints mentioned earlier about the field. The young girl going alone into the woods is another typical fairy story situation, and usually means she is in danger. All this makes you anticipate something scary, and this means that the line "he rose from the plough beyond the hedge" makes you jump almost as much as it does Sandra. Of course it is only Kerry - this is another case of appearances being deceptive, and Sandra being proved wrong. ...read more.

Like Mrs Scatchard with Rebecca, he realises that something is odd about Mrs Rutter before Sandra does - "I don't go much on her". He is more affected by the story than Sandra is. He has grown up to think of women as caring and nurturing, and is horrified to think that a woman could treat someone like that. He reacts more obviously and exaggeratedly than Sandra does - "The boy's spoon clattered to the floor", "The boy shoved his chair back" Sandra sees him differently at the end - from "not up to much" to "he had grown - his anger eclipsed his acne.". I have found out that there are many differences between 19th and 20th century writing. The fact that the stories were written in different centuries affects the way the characters act and what they are scared of. Although The Ostler seems complicated because of the typical 19th century language and structure, it is actually a more straightforward horror story because it is about fearing violence rather than people's mind's. The stories are similar in that nothing too horrific actually happens in either of them. They are more about the character's fears. Personally, I liked The Ostler less than The Darkness Out There, as it deals with a more supernatural horror which only affects the character in the story, and so did not have such an impact on me. I liked The Darkness Out There as it makes you think, and it applies to everyone, which makes it truly chilling. At the end Sandra is changed forever. The wood is emptied of the fictional witches, wolves, tigers and prowling blokes, but this does not make her feel better. The old fears were in a way comforting - "It was cosy to think of Packer's End, where you weren't", but the new fear cannot be shut out or escaped from because it is a part of her, a part of every human that is capable of unspeakable horror. Amy Stephens, 11E Page 1 ...read more.