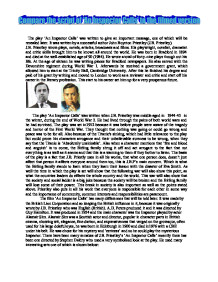 Compare the script of 'An Inspector Calls' to the filmed version

The play 'An Inspector Calls' was written to give an important message, one of which will be revealed later. It was written by a successful author John Boynton Priestley (J.B. Priestley). J.B. Priestley wrote plays, novels, articles, broadcasts and films. His playwright, novelist, dramatist and critic skills brought him to be known all around the world. He was born in Bradford in 1894 and died at the well-established age of 90 (1984). He wrote a total of forty-nine plays though out his life. At the age of sixteen he was writing pieces for Bradford newspapers. He also served with the Devonshire regiment during World War 1. Afterwards he received a government grant, which allowed him to start at the Trinity Hall, Cambridge University. After this he finished his degree and paid of his grant by writing and moved to London to work as a reviewer and critic and start off his career in the literary profession. This start to his career set him up for a very prosperous future. The play 'An Inspector Calls' was written when J.B. Priestley was middle aged in 1944-45 in the winter, during the end of World War 2. He had lived through the pains of both world wars and he had survived. The play was set in1912 because it was before people were aware of the tragedy and horror of the First World War. They thought that nothing was going or could go wrong and peace was to be for all. Also because of the Titanic's sinking, which had little relevance to the play but could prove his characters arrogance and their unbelievable sureness to be wrong, when they say that the Titanic is 'Absolutely unsinkable'. ...read more.

Then she moved to Brumley to better herself and ended up losing her job and ending up in a prostitute bar. Now she has no where to live so she must stay with her friend so Gerald can't resist helping. But then Gerald gets her a home but he comes around to her place with a hamper and acts all pushy and another side to Gerald is shown, one that isn't shown nowhere near as well in the book. The film also shows the upsetness of both Eva and Gerald better when they break up and so this is a good point in the film, the way that it can show more expression than the book in the way the characters react and their faces and actions. The Inspector undermines the Birling's and acts as if he is of higher class than them and this is shown most excellently in the film, again in expressions and actions. In the film Eric is shown to be more stupid and simple and plain like in one of his flashbacks when he met Eva on the tram and he is drunk it shows how silly he could be and the book never recognised Eric as being a bit dim. The book never showed that Eric really ever cared for Eva but the film showed that he did actually care when it was mentioned that he left her when he found out she was pregnant and he got really upset and angry. When Gerald returns from the walk he took he and Sheila hold hands which is a sign that she still loves him and that is not in the play. ...read more.

The fact that what everyone does effects everyone else isn't that strong and so people would notice this meaning that much if they had not read the book because they would be to interested in the characters problem, emotions, dilemmas and worries. I would suggest that to make the production better the importance of Eva Smiths death should be brought out more at the end and the 'Blood and Anguish' speech should be in there somewhere else some of the meaning is lost. The filmed version has a advantage that it can give the audience what is wanted at that time because when the play was written the importance of the war was wanted to be shown to the reader but when the film was made they wanted to take their minds off the war. Also the filmed version can excite the audience in many other ways such as in the way that emotions can be exaggerated and problems at the time can be brought out and fun can be made, such as in the way that the Inspector disappears. The differences between the play and film are mainly that the ending has totally been altered and that the most important speech has been cut. In my opinion the filmed version has totally altered the script and is now purely for entertainment reasons and is not for the fact that the social factors matter. Its not for J.B. Priestleys very important message any more, the play has been ruined in my eyes, but the audience of 1954 (when the film was made) wanted it that way else it would not of been altered that drastically. ...read more.