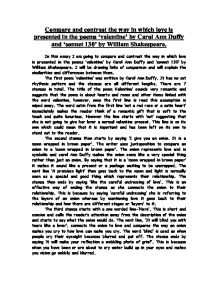 compare the way love is presented in 'valentine' and 'sonnet130'

The sixth stanza begins with the use of repetition as it repeats the line 'I give you an onion' used in the beginning of the poem and refers back to the poems meaning. It could also suggest that carol Ann Duffy felt strongly about giving the onion and it held a lot of importance to her. The next line 'its fierce kiss will stay on your lips' implies the onion brings everlasting love. The word 'fierce' relates Duffy's passion to her lover, with an onion and by using the word 'kiss' she brings a romantic and passionate atmosphere to the stanza. The taste of an onion is sharp and stays on the lips for a long time, similarly to a kiss which is remembered and can be felt on your lips a long time after as it is an important part of the relationship. The following line is only three words 'possessive and faithful' and is describing the kiss using very powerful adjectives that make an impact on the reader. She is saying that it is not an ordinary kiss but one with a deeper meaning which relates to an onion and how it leaves a strong taste on your lips. ...read more.

each line, contrasting objects with positive imagery with his mistress however saying that she is the opposite of them, for example, 'but no such roses see I in her cheeks'. Shakespeare juxtaposes beauty to ugliness which makes this line effective. This contrast changes the tone of the poem. Roses are used to represent beauty and delicateness, however Shakespeare juxtaposes this by saying the woman does not remind him of roses. This suggests that his mistress is not beautiful. To conclude, I feel that 'valentine' was a much more effective poem as Duffy managed to get a lot of meaning out of just an onion and she used a lot of powerful language such as 'possessive'. She also used many metaphors and similes and although the poem did not rhyme, the range and different lengths of stanzas had a good effect as it made certain things stand out. 'Sonnet 130' was also an enjoyable poem to read as it had a good rhythm throughout and had a lot of deep meanings to it. It also had good use of juxtaposition and the words used helped created imagery inside the readers mind. However, it was not as interesting as 'valentine' and did not express as much emotion. ...read more.

This essay includes some very strong analysis of each poem; however the title suggests a comparative piece and these poems aren't really being compared in this essay but instead analysed individually and then comparison happens towards the end of the essay. More skillful analysis would look at links throughout the essay and consider the relative effectiveness of different and similar techniques employed by the poets.