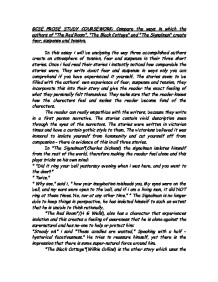 Compare the ways in which the authors of

GCSE PROSE STUDY COURSEWORK: Compare the ways in which the authors of "The Red Room", "The Black Cottage" and "The Signalman" create fear, suspense and tension. In this essay i will be analysing the way three accomplished authors create an atmosphere of tension, fear and suspense in their three short stories. Once i had read their stories i instantly noticed how comparable the stories were. They write about fear and suspense in ways only you can comprehend if you have experienced it yourself. The stories seem to be filled with the authors' own experience of fear, suspense and tension, they incorporate this into their story and give the reader the exact feeling of what they personally felt themselves. They make sure that the reader knows how the characters feel and makes the reader become fond of the characters. The reader can really empathize with the writers, because they write in a first person narrative. The stories contain vivid description seen through the eyes of the narrators. The stories were written in victorian times and have a certain gothic style to them. The victorians believed it was immoral to isolate yourself from hummanity and cut yourself off from compassion - there is evidence of this in all three stories. In "The Signalman"(Charles Dickens) the signalman isolates himself from the rest of the world, therefore making the reader feel alone and this plays tricks on his own mind: " "Did it ring your bell yestersay evening when i was here, and you went to the door?" ...read more.

In each one of the three stories there is a climax in the story. In "The Red Room", the climax of the story is when the narrator, walks along the small, thin subterranean passage way leading him to the red room: " The long, draughty, subterranean passage was chilly and dusty, and my candle flared and made the shadows cower and quiver." This suggests that the narrator is being pursued by a supernatural element. The use of personification implies that the shadows are taunting the narrator. HG Wells has personified the shadows so that they too appear to be intimidated and threatened by a hostile environment. In "The Black Cottage", the climax of the story is the whole time the robbers are lying to get into the cottage and the poor chamber maid is scared and looks for comfort so she cuddles up to her pussy: "I was still sitting in the window seat drying my face, when i suddenly heard their voices close behind me. They were feeling the outside of the window against which i was sitting. It was protected, like all the other windows in the cottage, by iron bars. I listened in dreadful suspense for the sound of filing, but nothing of the sort was audible." The reader is fearful for bessie's vulnerability and is eager to know what her fate will be. She is clearly unprotected and will need to rely on her own resourcefulness. ...read more.

Collins creates this effect of dead silence, to leave the reader in suspense for a while, therefore when the ruffians attack the door it surprises the reader and the maid panics which excites the reader. The use of the word Ruffian, is well portayed, it gives the reader a sense of knowing that the attackers are dim-witted and are ugly and scary to the maid. This gives the reader some comfort in knowing that the maid could well be alot smarter than the attackers and could escape from the terrorfying situation she is in. "The Signalman", Alot of climax and suspense becomes apparant in this story because the character tries to find out whether the supernatural that haunts him is real: ""Will you come to the door with me and look for it now?" He bit his under lip as though he were somewhat unwilling, but arose." Dickens shows here, that the once arrogant and self admired narrator is frightened of what might be on the other side of the red room's door. This then creates an understanding for the reader that even the most arrogant person will be afraid, once in the presence of the red room. With these examples you can see how the writer creates fear, suspense and tension, and why these stories are so brilliantly appraised as excellent pieces of writing. ...read more.