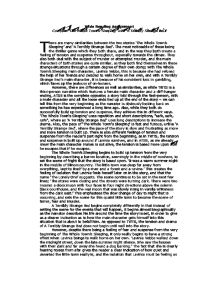 Compare 'The Whole Town's Sleeping' with 'A Terribly Strange Bed'.

Wide Reading Assignment Compare 'The Whole Town's Sleeping' with 'A Terribly Strange Bed' T here are many similarities between the two stories 'The Whole Town's Sleeping' and 'A Terribly Strange Bed'. The most noticeable of these being the thriller genre which they both share, and in the way they both create a feeling of tension and suspense throughout, especially towards the climax. They also both deal with the subject of murder or attempted murder, and the main characters of both stories are quite similar, as they both find themselves in these strange situations through a certain degree of their own doing; with The Whole Town's Sleeping main character, Lavinia Nebbs, this is because she had refused the help of her friends and decided to walk home on her own, and with A Terribly Strange Bed's main character, it is because of his consistent luck in gambling, which flares up the jealousy of on-lookers. However, there are differences as well as similarities, as while TWTS is a third-person narrative which features a female main character and a cliff-hanger ending, ATSB is the complete opposite; a story told through the first-person, with a male character and all the loose ends tied up at the end of the story - we can tell this from the very beginning as the narrator is obviously looking back on something he has experienced a long time ago. ...read more.

Her heart exploded in her. The sound of its terrified beating filled the universe' There is also a good use of metaphors in that as the writer describes the state of Lavinia's heartbeat, which adds to the intense drama as the reader now has a clear indication of the paralysing fear that she is suffering. The reader may well be feeling the same way. "There, there!" she screamed to herself. "At the bottom of the steps. A man, under the light! No, now he's gone! He was waiting there!" The terror she is suffering is clearly messing with her mind as she not only becomes paranoid into thinking she is being followed, but begins talking to herself as if talking to someone else. The pace of the story then begins to slow down, as if reflecting that Lavinia's heartbeat is doing the same as she begins to calm down. 'She listened. Silence. The bridge was empty. Nothing, she thought, holding her heart. Nothing. Fool. That story I had told myself. How silly. What shall I do?' At first glance it does seem that she is beginning to calm down, but upon further thought, the reader is given the idea that she is only trying to convince herself that she has calmed down, when really, deep down, she is still as terrified as before. The writer begins building the suspense up again as Lavinia continues down the steps, counting each step as she passes them, and pausing after every few steps. ...read more.

The candle, fully spent, went out; but the moonlight still brightened the room. Down and down, without pausing and without sounding, came the bed-top, and still my panic-terror seemed to bind me faster and faster to the mattress on which I lay-down and down it sank, till the dusty odour from the lining of the canopy came stealing into my nostrils' There is a total of ten commas and full-stops in that short piece of text, the short sentences created by these really build up the reader's tension quickly and powerfully, in the same way that Faulkner's fear must be building up. So, it's obvious that the biggest difference between the two texts is how different sentence lengths are used to create two different 'speeds', A Terribly Strange Bed being the quicker of the two stories. The biggest similarity between the two will have to be the situations that the two main characters find themselves in. They are both situations of fear, suspense and anxiety as neither of the two characters know what is around the corner, or what is about to happen to them. Overall, I think I preferred A Terribly Strange Bed to The Whole Town's Sleeping. The main reason being that I think TWTS tended to drag on a bit too much when describing a situation. As detailed as this was, I felt it was needless, and felt the situations in A Terribly Strange Bed were described well enough is short, sharp sentences. I also felt the quick pace if ATSB made it more exciting than TWTS. ...read more.