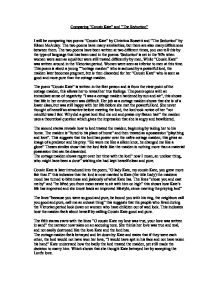 Comparing "Cousin Kate" and "The Seduction" I will be comparing two poems "Cousin Kate" by Christina Rossetti and "The Seduction" by Eileen McAuley. The two poems have many similarities, but there are also many differences between them. The two poems have been written at two different times, you can tell this by the type of language that has been used in the poems. 'Seduction' is set in the '80's when women were seen as equal but were still treated differently by men, While "Cousin Kate" was written around in the Victorian period. Women were seen as inferior to men at this time. This poem is about a young ""cottage maiden" who is seduced by a powerful lord, the maiden later becomes pregnant, but is then discarded for her "Cousin Kate" who is seen as good and more pure than the cottage maiden. The poem "Cousin Kate" is written in the first person and is from the view point of the cottage maiden, this allows her to reveal her true feelings. The poem opens with an immediate sense of negativity "I was a cottage maiden hardened by sun and air", this shows that life in her environment was difficult. Her job as a cottage maiden shows that she is of a lower class, but was still happy with her life before she met the powerful lord. ...read more.

She thinks her love was true and real, and not easily destroyed like the love Kate and the lord has. The cottage maiden feels betrayed and let down by Kate and states that if they were each other, the lord would not have won her love, "I would have spit in his face and not have taken his hand" Kate understand how the badly the lord treated the maiden, yet still made the decision to marry him. Which shows that she thought Kate betrayed her by accepting the Lord's love. The final stanza is told with a more adolescent attitude, and ends with a revelation. It appears as if the maiden is using the child she and the lord have together as an excuse. "I've a gift you have not got and seem not like to get" this suggests that the maiden is taunting Kate that she has something that she could never have. This gives the impression that the cottage maiden is grateful for the child she has been giving and is proud of what she has, feeling there is hope for the future. The second Poem "The Seduction" is about a girl who a boy at a party and has sex with him whilst drunk, and ends up pregnant, once the pregnancy is revealed there is no more mention of the boy, this gives the impression that the boy used her for a one night stand and she never sees him again. ...read more.

In the fourteenth stanza, we get a shocking insight into the thoughts and feelings of the girl "better to destroy your life, in modern and manmade ways, than to fall into a despicable feminine void" this shows that she feels she has destroyed her life. She feels betrayed by the stories she has read in magazines which promise her sixteenth year would be "Full of glitzy fashion features and stories of romance," she feels cheated by the promise that was made. In the fifteenth and final stanza we see how negative societies views are, which is similar to "Cousin Kate". The final part gives the impression that the pregnant teenager feels hopeless, which is a stark contrast to "Cousin Kate" in which the girl feels that her baby as a blessing, "I've a gift". I enjoyed reading the poems, but I especially enjoyed looking at "Cousin Kate" as I felt I could understand and relate to the character of the maiden better due to it being written in the first person. I also enjoyed "The Seduction" as it was only written a few decades ago (1980's), which made it easier to relate to and the poem its self easier to interpret as it contained modern language that I was more familiar with. After reading both poems I realized how society views on teenage pregnancy have hardly changed, it is still frowned upon by society. ?? ?? ?? ?? ...read more.