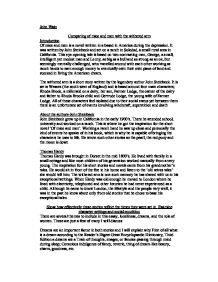 Comparing of mice and men with the withered arm.

John Wain Comparing of mice and men with the withered arm Introduction Of mice and men is a novel written in a based in America during the depression. It was written by John Steinbeck and set on a ranch in Soledad, a small rural area in California. This eye-opening tale is based on two contrasting men, George, a small, intelligent yet modest man and Lenny, as big as a bull and as strong as an ox, but seemingly mentally challenged, who travelled around with each other working as ranch hands to earn enough money to eventually own their own piece of land and succeed in living the American dream. The withered arm is a short story written by the legendary author John Steinbeck. It is set is Wessex (the south west of England) and is based around four main characters; Rhoda Brook, a milkmaid on a dairy, her son, Farmer Lodge, the owner of the dairy and father to Rhoda Brooks child and Gertrude Lodge, the young wife of Farmer Lodge. All of these characters feel isolated due to their social status yet between them there is an unfortunate set of events involving witchcraft, superstition and death About the authors-John Steinbeck John Steinbeck grew up in California in the early 1900's. There he attended school, university and worked on a ranch. This is where he got the inspiration for the short novel 'Of mice and men'. Working a ranch hand he saw up close and personally the kind of events he speaks of in his book, which is why he is capable of bringing the characters he uses to life. He wrote such other stories as the pearl, the red pony and the moon is down Thomas Hardy Thomas Hardy was brought in Dorset in the mid 1800's. He lived with family in a small cottage and like most children of his generation worked manually from a very young. ...read more.

The pressure of Mrs. Lodge's person grew heavier; the blue eyes peered cruelly into her face; and then the figure thrust forward its left hand mockingly, so as to make the wedding ring it wore glitter in Rhoda's eyes. Maddened mentally, and nearly suffocated by pressure, the sleeper struggled; the incubus, still regarding her, withdrew to the foot of the bed, only, however, to come forward by degrees, resume her seat, and flash her left hand as before. Gasping for breath, Rhoda, in a last desperate effort, swung out her right hand, seized the confronting spectre by its obstructive left arm, and whirled it backward towards the floor, starting up herself as she did so with a low cry "O, merciful heaven!" she cried, sitting on the edge of the bed in a cold sweat; "that was not a dream - she was here!" She could feel her antagonists arm within her grasp even now - the very flesh and bone of it, as it seemed. This dream shows the Rhoda Brooks hatred is pure jealousy of Gertrude's relationship with farmer Lodge and of her youthful looks. In the dream the way the spectre flashed the wedding ring at Rhoda showed a great deal if envy and resentment for what Gertrude has. And also how Gertrude is disfigured shows that even though Gertrude is a pretty young woman to everyone else, Rhoda sees her as a disfigured old hag. During the 1800's children born through unmarried parents were looked down upon, well not so much the children as the parents, but as Farmer Lodge owned the land where most villagers lived and worked Rhoda was the one who was isolated because if it. Although the book describes Rhoda Brook as a "faded woman on thirty" and as a woman of "well defined features with a large frame I would imagine fro her to have a relationship with Framer Lodge she would have had too have been a beautiful, popular young woman in her late ...read more.

"Yes mother, "said the boy. "Is father married then?" "Yes.... You can give her a look and tell me what she's like, if you do see her." "Yes, mother." "If she's dark or fair, and if she's tall - as tall as I..." The boy responds to Rhoda Brooks every command with yes mother, as if he'd been trained that way. It reminds me slightly of the film Psycho the way he lives with his mother and agrees with her every command. It is no fault of the boy that he is isolated but it is a classic example of the times and even today in a sense, that the townspeople didn't want their children associating with him because if his background. It is quite ironic that the boy, who spent so much of his life alone, happened to be hung alone The other lonely character in The Withered Arm is Gertrude Lodge. After receiving the unfortunate curse of the withered arm her husband paid her no attention and she became rather isolated. After making the trip with Rhoda Brook to see conjurer Trendle she also, due to what she saw there, stopped speaking with Rhoda. She spent her time waiting for conformation of a hanging so she could get her "blood turned" and go back to how things used to be. This is when she says; "O, Lord, hang some guilty or innocent person soon!" It is quite ironic that she should say this due to the fact she wanted someone to be hung so she could continue life the way she wanted it but it turned out to lead to her death Thomas Hardy used loneliness to reflect upon the times the book is set in by basing Gertrude's loneliness around superstition and witchcraft and Rhoda Brook and the boy's loneliness around Rhoda's affair with Farmer Lodge which at the time would have led to rejection from society. Hopefully in this essay I have explained how both stories reflect the times they were set in by pointing out the importance of dreams, loneliness, social class, relationships and role of women. ...read more.