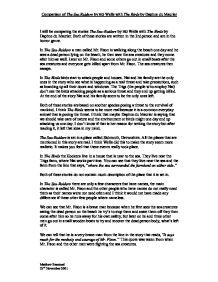 I will be comparing the stories The Sea-Raiders by HG Wells with The Birds by Daphne du Maurier. Both of these stories are written in the 3rd person and are in the horror genre. In The Sea-Raiders a man called Mr. Fison is walking along the beach one day and he sees a dead person lying on the beach, he then sees the sea creatures and they come after him as well. Later on Mr. Fison and some others go out in small boats after the sea creatures and everyone gets killed apart from Mr. Fison. The sea creatures then escape. In The Birds birds start to attack people and houses. Nat and his family are the only ones in the story who see what is happening as a real threat and take precautions, such as boarding up all their doors and windows. The Trigs (the people who employ Nat) don't see the birds attacking people as a serious threat and they end up getting killed. At the end of the story Nat and his family seem to be the only ones left. Both of these stories are based on another species posing a threat to the survival of mankind. ...read more.

In The Birds the main character is a man called Nat who works part time on a farm, he works part time because of a wartime disability. Nat is of a solitary disposition and likes to work alone, even though he has a wife and kids. When the birds first attack Nat one night he was scared and thinks that the birds were scared and that's why they did it, but when they keep attacking people and houses Nat knows that they are trying to injure and kill people on purpose. The first night they attacked him he thinks it was because of the weather, because it was a lot colder than normal that winter. You can see that Nat thinks this when he says, "It's the weather, he said. It must be that; it's the hard weather." After the birds first attacked him, Nat is careful of the birds and keeps himself and his family indoors all the time only going out to get supplies to keep them safe and alive while the birds are still around. The birds that attack are all different species of normal land birds and there are also sea birds, such as gulls as well. ...read more.

I personally would rather it had a normal ending. You can quite easily tell that the stories were written in different centuries, and that The Sea Raiders is the story that was written first because it seems more dated, because the style it was written in is not used in many stories that were written in the 20th century. You can tell that The Birds was written in the mid-20th century because they have a radio, but it is called a wireless. They also seen to have no TV, phone, or any other forms of communication or sources of news that they can get without going out. The wireless seems to be their only source of what is going on elsewhere. The comment about the Russians was made because the story was written during the cold war. In conclusion I prefer The Birds because it is much easier, because it uses a simpler vocabulary and it is set in almost modern times. I also like it more because it is based on something that could one day really happen and it also makes you think of what it would be like if birds really started to attack humans. Comparison of The Sea Raiders by HG Wells with The Birds by Daphne du Maurier Matthew Benstead 22nd November 2001 ...read more.