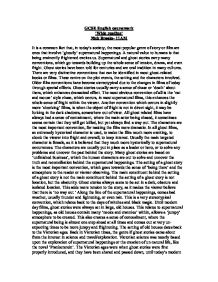 GCSE English coursework 'Wide reading' Nick Brooks- 11AM It is a common fact that, in today's society, the most popular genre of story or film are ones that involve 'ghostly' supernatural happenings. A natural value to humans is that being eminently frightened excites us. Supernatural and ghost stories carry many conventions, which go towards building up the whole sense of tension, drama, and even fright. Ghost stories have been told for centuries and are oral tradition in many cultures. There are very distinctive conventions that can be identified in most ghost-related books or films. These centre on the plot events, the setting and the characters involved. Older film conventions have become stereotypical due to the changes in films of today through special effects. Ghost stories usually carry a sense of chase or 'death' about them, which enhances dramatical effect. The most obvious convention of all is the 'cat and mouse' style chase, which occurs, in most supernatural films, this enhances the whole sense of fright within the viewer. Another convention which occurs in slightly more 'shocking' films, is when the object of fright is not in direct sight, it may be lurking in the dark shadows, somewhere out of view. All ghost related films have always had a sense of containment, where the main actor being chased, it sometimes seems certain that they will get killed, but yet always find a way out. The characters are the most important convention, for making the film more dramatic. In all ghost films, an extremely hysterical character is used, to make the film much more exciting, to shock the viewer into fright and overall, to keep interest. Usually the main targeted character is female, as it is believed that they much more hysterically to supernatural occurrences. The characters are usually put in place as a leader or hero, or to solve any problems and uncover the past behind the story. ...read more.

This statement adds to the build up of tension as a convention of the past coming back to haunt. So many flashbacks occur in Farthing house, that they become the element, which actually tells most of the story as well as the past. The first flashback occurs just after the letter from the mother to the daughter. It is a timeshift to a few weeks back when she quotes 'the edges of my consciousness blurred and insubstantial came into focus and in a rush I remembered...' to which she begins another flashback of her trip to Farthing house, which is where the story begins. The lady, the writer of the letter, predominantly tells the main body of 'Farthing house' in a flashback to her daughter. The way in which the writers create setting establishes a sense of place. Both of the stories contain a very conventional setting and they are both very similar. 'The red room' is wholly set in a large old house, which you are later told that it is called Lorraine castle. You can tell that the occupant of the house is very interested in keeping the house in its original state, the young man' s description helps you to understand that the theme of the house is very much that of a castle. He says that mounted upon the walls is 'sconces', which are wall- mounted candlesticks, just like back in the days when electricity was not invented. You can also see that the owner of the house is interested in travel. The young man says that there is a 'porcelain Chinaman on a buhl table', which is the sort of object that you would pick up as a souvenir on your world-wide travels. The setting in 'Farthing house' follows a similar theme but yet the house served a very different purpose. The home was set in a very quiet location as you can tell from the lady's description of her journey there. ...read more.

The young man in the story adds to the creation of drama and tension by the way that he becomes extremely frightened by the ghostly encounter. I think that the young man does make good use of the conventions, but in contrast with the characters in 'Farthing house', Susan Hill makes better use of the character related convention, by not using many characters. Overall by the evidence I have provided above, I think that it is quite hard to decide which story makes use of ghost story conventions best. Both stories have made excellent use of the conventions to create two stories of the same theme, but yet are both very different. By a very slight margin, I think that 'The red room by H.G Wells uses the conventions better than 'Farthing house'. I think this because, firstly the plot structure of 'The red room' creates a much more frightening story, in that the ghost is not actually seen. This makes the reader wonder more about what or whom the supernatural being is, thus creating a more exciting read. I also think that the setting of 'The red room' is better than the one in 'Farthing house'. I think this because, in my view, an older setting (like the one in 'The red room') creates a much better atmosphere for a traditional ghost story. On the other hand, the very descriptive journey to Farthing house helps to create a very good picture of how isolated the setting of it really is. As far as the character related convention goes, I think that Susan Hill's use of very little characters creates an excellent atmosphere that is very chilling and quiet, the perfect environment for a traditional ghost story. Although I do think that the elderly servants that H.G Wells uses in 'The red room' are brilliant for working in contrast with the very ghostly atmosphere. So overall, I think that 'The red room' by H.G Wells makes use of the conventions of a ghost story best. Wells has kept within his science- fiction theme to create an excellent and very traditional ghost story. ...read more.