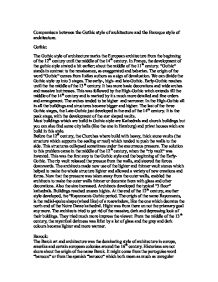 Comparison of Gothic and Baroque Architecture.

Comparrison between the Gothic style of architecture and the Baroque style of architecture. Gothic: The Gothic style of architecture marks the European architecture from the beginning of the 12th century until the middle of the 14th century. In France, the development of the gothic style strated a bit earlier; about the middle of the 11th century. "Gothic" stands in contrast to the renaissance, as exaggerated and babarian. The origin of the word "Gothic" comes from Italian authors as a sign of devaluation. We can divide the Gothic style up into 3 stages. The early-, high- and late-Gothic. Early-Gothic reaches until the the middle of the 13th century. It has more basic decorations and wide arches and massive butttresses. This was followed by the High-Gothic witch extends till the middle of the 14th century and is marked by it s much more detailed and fine orders and arrangement. The arches tended to be higher and narrower. In the High-Gothic all in all the buildings and structures became bigger and higher. The last of the three Gothic stages, the Late-Gothic just developed in the end of the 14th century. It is the peak stage, with the development of the star shaped vaults. Most buildings which are build in Gothic style are Kathedrals and church buildings but you can also find some city halls (like the one in Hamburg) ...read more.

It was the expression of the monarchs at that time. It represented power and influence; and was the aspiration of something "higher" and was the way they expressed their feeling of superiority. You can easily see that the monarchs at that time saw theselfs as the centre of the world by looking at the gardens of the palace of Versailles; every path in the huge area is pointing towards the middle of the palace which was the place where the monarch lived. The whole style of the Barok architecture consists of much more movement and curves than the predecessor the Renaissance.The collumns and arkades (arch between two columns) lost their calmness and restfullness by setting them in "movement" with the spiral shaped decorations. Colonades where decorated with straight beams to give an impression of more room. Everything appeared bigger and richer moddeled than in former times. Architects made use of konvex (bend outwards) and konkarv (bend inwards) shapes, which gave them new opportunities in order of room designing. Apart from the typical forward and backward jumping extensions in the outside wall another architectual thing became increasingly popular; the Risalits. Which are forward leaping parts of the building. The walls seemed to melt over to the sealings with the help of stucco. Mirrors hung up on opposite walls gave the visitors the impression/illusion of endless room. ...read more.

While the Gothic has it s special "heavy-dark" appearance, the Brock style looks much lighter and full of shapes and variety. Inside the buildings it is pretty much the same contrast. While the Gothic buidings were kept more basic inside. The first thing you normally recognize when you enter a gothic building, is the hight of the sealing. The inside s are decorated with woodwork and paintings which where hanging at the wall. The whole impression is more pure and basic but still facinating. The Barock buildings where filled with wallpaintings, stucco and other decoratinons. Parts of the walls and doors where often painted with patterns and shapes, most often this was done with gold colour. The Barock buildings even look too much deorated and too exagerrated. They seem to drown in colours and shapes. In general we always have to keep in mind that these styles of architecture developed under totally different circumstances. Both styles were strongly an expression of superiorty, domination and power of the rich, the monarchs and the church. Both styles where enourmous achievements for their time, and even if the Gothic lookes more plain and simple to us, it must have been an a totally new dimension for the people at that time. I think that the Barock style of architecture is really a bit too exagerrated. I think it just looks "too much". ...read more.