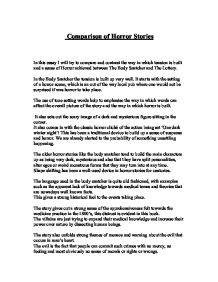 Comparison of Horror Stories In this essay I will try to compare and contrast the way in which tension is built and a sense of Horror achieved between The Body Snatcher and The Lottery. In the Body Snatcher the tension is built up very well. It starts with the setting of a horror scene, which is an out of the way local pub where one would not be surprised if was horror to take place. The use of tone setting words help to emphasise the way in which words can affect the overall picture of the story and the way in which horror is built. It also sets out the scary image of a dark and mysterious figure sitting in the corner. It also comes in with the classic horror clich� of the action being set 'One dark winter night'! This has been a traditional device to build up a sense of suspense and horror. We are already alerted to the probability of something unsettling happening. The older horror stories like the body snatcher tend to build the main characters up as being very dark, mysterious and also that they have split personalities, alter egos or weird monstrous forms that they may turn into at any time. Shape shifting has been a well-used device in horror stories for centuries. ...read more.

The writer tries to indicate the fact that at times the sense of morality raises its head of the body snatchers, for instance when He writes, 'A horrible sense of blackness and the treachery of fate seized hold upon the soul of the unhappy student. My god! , What have I done, and when did I begin. The shape of the story is a short story with punchy horror twists, unlike the lottery where there is quite an intriguing enigma installed from the start and the only twist coming at the end. The events unfold exceptionally predictably in the Body Snatcher and you can see every twist coming a mile off, compared to The Lottery where there is a major suburbia shattering twist. This style of predictable horror stories was characteristic of the 1800's through to the 1900's, but nowadays the horror stories are packed with more unpredictable twists The Lottery was written in 1881 but it was refused publication for three years due to immoral questions raised by the story. There were also questions raised about the pursuit of personal gain and clearly greed. The Lottery's theme is of a perfect America suburbia town that is not all that it seems. Its surreally happy surface is the way that it establishes tension in contrast to novels written in the 1800's that seemed to constantly involve medical freaks and killers. ...read more.

The lottery raises the moral question that if you are conditioned into doing something it seems morally acceptable, like stoning someone to death for instance! The church also played a greater part in peoples lives in the 1800's and early 1900's century unlike today where I think religion has taken more of a backseat to peoples busy lifestyles. This reliance on the church meant that the Body Snatcher was morally incorrect in most Christian's eyes, and that even to read this story would be a sin against god. The horror in the body snatcher is very much to do with the darkness of mans heart, greed and the apparent need for an increase in knowledge that all humans possess. The atmosphere of the Lottery was very tense and edgy in comparison to the body snatcher where there is more emphasises on setting a dark cold and gloomy atmosphere. In conclusion I think these are two very different stories, this mostly being a reflection of the time they were published and so to make clear comparisons would be difficult considering the different nature of the books, but to make theme comparisons is not as difficult. But I do think there is a clear contrast in the way tension is built up between the two stories. One might be described as a gothic, horror style and the other as a psychological thriller. By JOE HALTER 11 ST Word count: 1,425 ...read more.