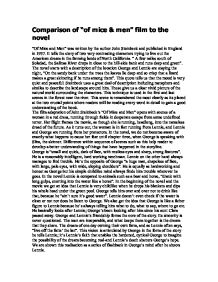 Comparison of &quot;of mice &amp; men&quot; film to the novel.

Comparison of "of mice & men" film to the novel "Of Mice and Men" was written by the author John Steinbeck and published in England in 1937. It tells the story of two very contrasting characters trying to live out the American dream in the farming lands of North California. " A few miles south of Soledad, the Salinas River drops in close to the hill-side bank and runs deep and green". The novel starts with a description of the location George and Lennie are staying the night, "On the sandy bank under the trees the leaves lie deep and so crisp that a lizard makes a great skittering if he runs among them". This quote tells us that the mood is very quiet and peaceful. Steinbeck uses a great deal of description including metaphors and similes to describe the landscape around him. These give us a clear vivid picture of the natural world surrounding the characters. ...read more.

In the beginning of the novel and the movie we get an idea that Lennie is very childlike when he drops his blankets and dips his whole head under the green pool. George tells him over and over not to drink like that, because he "ain't sure it's good water". Lennie doesn't even check if the water is clean or not nor does he listen to George. We also get the idea that George is like a father figure to Lennie because he's always telling him what to do, what to say, where to go etc. He basically looks after Lennie; George's been looking after him since his aunt Clara passed away. George and Lennie's friendship forms the core of the story. Its sincerity is never questioned. The men are inseparable, and what keeps them together is the dream that they share. The dream of one day owning their own farm, and as Lennie often says, "live off the fatta' the lan". ...read more.

Lennie was explained as a beast in the book and, "his shoulders could fill the doorway". In the movie he was stronger and bigger than the others were but not the extreme amount that the book portrayed him to be. Every other thing about the characters was extremely as the book told it. I felt that the movie was great and I loved it as much as I loved the book. I would give the movie a 10 out of 10 because it was just so great. The only parts I didn't like were in the end it made me cry. I felt so into the dream that Lennie and George shared that I was very sad when it was destroyed. I am sure that if I didn't watch the movie in a classroom I would have gotten more out of it but none the less it was a masterpiece. Unlike all of the other movies that are translated from a book this one was quite accurate to the book. It was very hard to point out the differences from the book and that is why I enjoyed watching the movie so much. ...read more.

This essays makes lots of statements about the film and the book but doesn't look at the comparisons in presentations in enough detail. It would have been better to develop each point in more detail and consider them fully for both the text and the film; even if this had meant fewer points were covered, the ones that were would have been in depth.