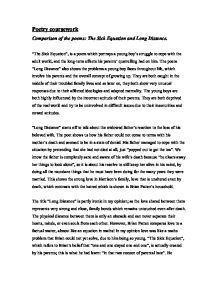 Poetry coursework Comparison of the poems: The Sick Equation and Long Distance. "The Sick Equation", is a poem which portrays a young boy's struggle to cope with the adult world, and the long-term effects his parents' quarrelling had on him. The poem "Long Distance" also shows the problems a young boy faces throughout life, which involve his parents and the overall concept of growing up. They are both caught in the middle of their troubled family lives and so later on, they both show very unusual responses due to their affected ideologies and adapted mentality. The young boys are both highly influenced by the incorrect attitude of their parents. They are both deprived of the real world and try to be uninvolved in difficult issues due to their insecurities and cowed attitudes. "Long Distance" starts off to talk about the widowed father's reaction to the loss of his beloved wife. The poet shows us how his father could not come to terms with his mother's death and seemed to be in a state of denial. His father managed to cope with the situation by pretending that she had not died at all, just "popped out to get the tea". We know the father is completely sane and aware of his wife's death because "he clears away her things to look alone", so it is about his resolve to still keep her alive in his mind, by doing all the mundane things that he must have been doing for the many years they were married. ...read more.

The two poets appear a bit unemotional and spiritless; they do not really talk about their own feelings, yet towards the end of the poems we find out how badly they are actually hurt and how deeply they are affected. Each poem finishes with a twist which makes things much clearer to us. For example in "Long Distance", just when you think you know what the writer is trying to tell you, just when you think you can empathise with him; his love for his father...and his torment at watching his father everyday carrying on as if his wife was still alive, the poem jolts at you. The last verse tells you that the poem was never about the father at all. The father is dead and long gone too...It's about the writer and his own struggle to accept the finality of his parents' death, and his own refusal to see them as "disconnected" from his life. He has even entered their telephone number in his "new black leather phone book" as if his parents were still alive. The irony is only displayed in the last stanza; while we felt that Harrison thought it was weird that his father was acting in that way, he turns out to do the exact same. The word "disconnected" emphasizes on how distant Harrison and his parents have become. ...read more.

to accept the loss of his parents, and Patten tries to come to terms with his parents' mistakes and his own wrong conclusions. The moods of the two poems are also very similar; they both have a very sorrowful and saddening moods and similar themes. The conversational language which is used also reflects on the poets' similar backgrounds; they both come from a working-class, Christian family. After reading each poem, you can clearly see the bitterness, frustration and sorrow coming from each poet; you can clearly see things from their point of view and completely empathize and sympathize with them. Nevertheless, there are also vast differences between the two poems; the most important is the moral or hidden message of each poem. It is not difficult to pick out the main point of each poem as each of the poems reflects the titles. "The Sick Equation" clearly refers to Brian Patten's first belief of the concept of love, ("one and one stayed one and one") and "Long Distance" implies the parting of people at death and the ever-lasting distance between the loved and the lost. It is ironic that the title of each poem which was the idea they started off with was proven to be wrong by the poets themselves. At the ending verse of his poem, Patten confirms "in their (his parents) sick equation not stay caught" and Harrison also states that "the disconnected number I (he) still calls". ...read more.