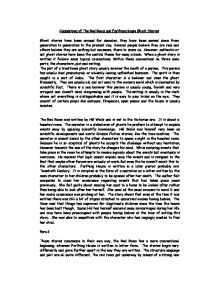 Comparison of The Red Room and Farthing House Ghost Stories.

Comparison of The Red Room and Farthing House Ghost Stories Ghost stories have been around for decades, they have been passed down from generation to generation to the present day. Several people believe they are real and others believe they are nothing but nonsense, there to scare us. However, authentic or not ghost stories have been the central theme for many a book. When a ghost story is written it follows some typical conventions. Within these conventions lie three main parts, the characters, plot and setting. The plot of a traditional ghost story usually involves the death of a person. This person has usually died prematurely or violently leaving unfinished business. The spirit is then caught in a sort of limbo. The first character is a believer and sees the ghost frequently. They are usually old and not used to the modern world which is dominated by scientific fact. There is a non believer this person is usually young, foolish and very arrogant and doesn't mind disagreeing with people. The setting is usually in the dark where not everything is distinguishable and it is easy to play tricks on the eye. They consist of certain props like antiques, fireplaces, open pianos and the house is usually isolated. The Red Room was written by HG Wells and is set in the Victorian era. It is about a haunted room. The narrator is a disbeliever of ghosts he prefers to attempt to explain events away by applying scientific knowledge. ...read more.

The young man eventually reaches the Red Room feeling a bit nervous he decides to conduct a search of the room. Especially the dark shadowy corners. The anticlimax is achieved by the lighting of candles. The story continues along the next few pages with little happening and then the next climax begins to take effect. The story starts to build up the language becomes short and sharp it is at this point that the author introduces more tension by making the candles blow out one by one and the character is unable to explain away the abnormality using scientific theory. The climax peaks at the time that the fire is extinguished. At this point the character has become very scared and in his panic manages to knock himself out. From this point onwards the story drops slowly and tails off with no conclusion arrived at. Farthing House starts on a high with the character beginning a sentimental journey back in time triggered by sights and smells she had experienced that day and which had drawn her back into the past. The next pitch at a climax is when she is shown to the Cedar room. She gets an uneasy feeling about the room and that same evening when settled for sleep she dreamed almost instantly about a baby and a crib she was being drawn into the past and she was awoken with the sound of a baby crying. ...read more.

To me the impression of the ghost I get in this story is one of someone playing with the man and enjoying watching the fear building up in him. I think HG Wells is trying to put the point across that not everything in the world can be explained away by science. The ghost in Farthing House is shown to us in a sadder atmosphere the reader can't help but feel sorry for the ghost. She appears because of the tragic circumstances surrounded by the loss of her child. I feel that she is reminding people of her tragedy as if to say look what happened to me don't you feel sorry for me knowing that nothing can be done for her. She is not intending to frighten. She introduced to the ghost by the sound of a crying baby permeating her dream. The writer is trying to write a story which explains that not all ghosts are to be considered evil or scary some of them just cannot rest because of the way they were treated while alive they feel as though their business is still unfinished. Both stories have their pros and cons but my favourite has to be The Red Room. This story contains more action and is more gripping and more of my idea of a traditional ghost story. Ghost stories sit well with the Victorian era because there was no electric light and London always seemed to be foggy. I would have liked a better ending with a more sustained climax. I found the ending to be a bit flat. ...read more.